Memorial services for Arleen Crowe, 93, formerly of Albert Lea, will be at 2 p.m. Sunday at Our Father’s House in Albert Lea. Interment will take place at a later date. 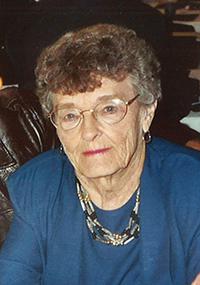 Arleen was the youngest of three daughters of Eli and Josephine (Rickheim) Hanson of Albert Lea, and was followed by one brother. Her early years were spent in Albert Lea where she attended school, graduating in 1942.

On May 9, 1948, Arleen wed Ronald Crowe of Hartland and they were married 62 years. Together they lived on an acreage just outside of Albert Lea where they raised two daughters, Pamela and Diane. Arleen was — for the most part — a homemaker. After Ron’s retirement, he and Arleen lived in Arlington, Texas; Hartland; and Springfield, Missouri.  Arleen moved to Spencer, Iowa, after Ron’s death. The final year of her life was spent under the care of Hartley Community Health Center in Hartley.

Arleen loved family camping trips, mostly travelling to the western states and San Diego, California, to visit Pam.  She enjoyed entertaining and decorating her home, especially for Christmas. She enjoyed Strauss waltzes and her dream was to go to Vienna and see the Alps.

In appearance she was a small, frail woman but she stood strong in her Lord and her faith. She was born again (John 3:3) and Holy Spirit filled (Acts 2:4) in the 1970s and she walked with her Lord faithfully. She was a member of Our Fathers House in Albert Lea and the many beautiful banners exhibited there were created and stitched by her, reflecting her love and her skill.

Turner Jenness Funeral Home is in charge of arrangements.  Please go to turnerfuneralhomes.com for further information.