Funeral services for Betty L. Krause, 86, of rural Oakland will be at 2 p.m. Saturday at Hayward Lutheran Church. The Rev. Joshua Enderson will officiate. Interment will be in Fairview Cemetery in Moscow Township. Visitation will be one hour prior to the service at the church on Saturday. Bayview/Freeborn Funeral Home is assisting the family. Online condolences are welcome at www.bayviewfuneral.com. 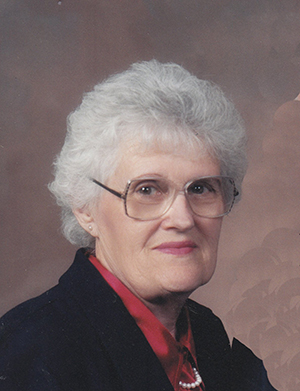 Betty Lou Krause was born Oct. 7, 1929, in Austin, the daughter of Leonard and Florence (Arett) Torrens. She grew up in Oakland graduating from Austin High School in 1947. She graduated from Winona State College in 1949. On July 22, 1951, Betty was married to Roger

Krause at St. Olaf Lutheran Church. They lived on a farm north of Albert Lea for eight years and then on their farm near Oakland for the last 53 years. Betty was a devoted teacher. She taught for seven years at the lower elementary level in the southern Minnesota area. After getting a degree in special education she taught for 23 years in the Albert Lea school system and retired in 1993.

Betty was a member of Trondhjem Lutheran Church and was involved with many church activities including being a past president of the Women of the Evangelical Lutheran Church Association there. Betty enjoyed quilting, gardening, reading, visiting with family and friends and spending time with her granddaughters.

Betty was preceded in death by her parents.