Memorial services for Beverly Meyers, 93, of Alden will be at 1 p.m. Wednesday at Redeemer Lutheran Church in Alden. The Rev. Greg Ofsdahl will officiate. Interment will be at a later date.  An Eastern Star service will begin at 11:30 a.m. at the church. Visitation will be from noon until the time of the service. Online condolences are welcome at www.bayviewfuneral.com. 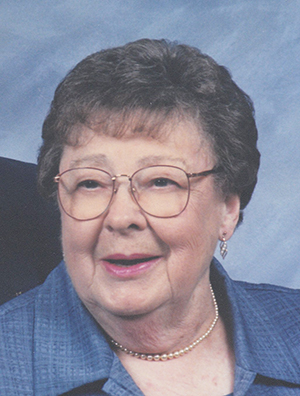 Beverly Margaret Meyers was born on June 17, 1922, in Alden, the daughter of Melvin Hugo and Hazel Marie (Fink) Schmidt. Beverly grew up in Alden and graduated from Alden High School. After graduation she continued her education attending the Mankato Teachers College.  On May 28, 1949, Beverly was united in marriage to Leo Nick Meyers at Grace Lutheran Church in Alden. The couple made their home in Alden where they were members of Redeemer Lutheran Church and she served on several ladies groups. Beverly was also an active member of the Eastern Star. She served as a Girl Scout leader as well as a campfire leader. Bev enjoyed traveling worldwide, fishing, gardening, computers, genealogy, painting and making Ukrainian Easter eggs. Most of all she enjoyed time spent with her family.

Beverly was preceded in death by her parents Melvin and Hazel Schmidt and brother-in-law, Wayne Wright.