A Blaine man pleaded guilty Wednesday morning in Freeborn County District Court to threatening to kill his former fiancée in September while incarcerated in the Freeborn County jail. 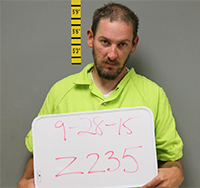 Pouliot reportedly made the statements the night of Sept. 28, after he was arrested for a possible domestic assault.

District Court documents stated officers from the Albert Lea Police Department responded to a call for assistance a few hours earlier from a residence on Seventh Street. The officers were informed of a domestic assault where a man was allegedly in possession of a knife.

Officer Dan Schmitt reportedly interviewed the alleged victim in the situation. She said she was at one point engaged to Pouliot, but that they were never actually married. They reportedly had children together, and he was reportedly there to see their kids.

The alleged victim said he “flipped out” on her. She reportedly said he had been drinking all day and that he wanted to get the family back together. He reportedly made threats with both a knife and baseball bat.

She said that he had been abusive before and that they were arguing. She reportedly said she didn’t want him to come back.

Pouliot was arrested that night and transported to jail.

The alleged victim reported to Officer Jay Crabtree that she had received a phone call from Pouliot and that he threatened to kill her after he got out of jail.

The officer obtained a phone call recorded at the jail at 11:04 p.m. Sept. 28, Assistant Freeborn County Attorney David Walker said. The officer reportedly went to meet with the defendant in the jail and was going to play a recording for him, but Pouliot indicated it was unnecessary.

A deputy with the Freeborn County Sheriff’s Office reportedly stated Pouliot said, “I will be coming back tomorrow with a bigger charge,” when being booked on the charge.

Pouliot was initially charged with two felony counts of terroristic threats: one for the threats made at the residence and a second for the treats made from the jail.

Pouliot pleaded guilty to the second count, and the first was dismissed as part of a plea agreement.

He faces a maximum sentence of five years in prison and a $10,000 fine.