Bridge Community Church senior pastor happy to be in A.L. 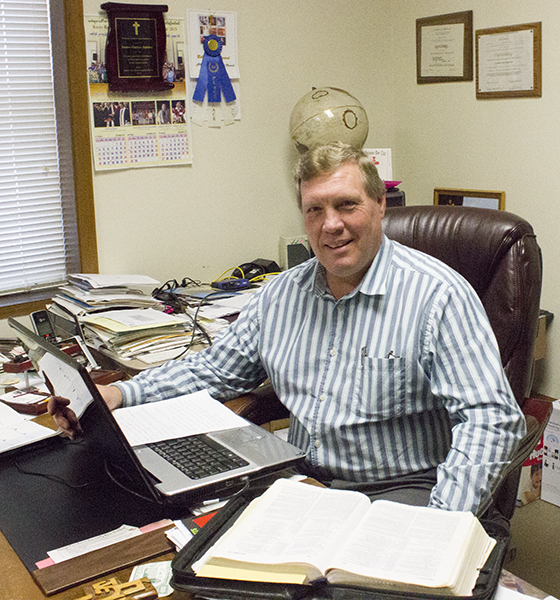 The senior pastor at Bridge Community Church in Albert Lea is fulfilling a request he said came from God.

A Plainfield, Iowa, native, Balsley said he wasn’t expecting the call to be a pastor.

“It really kind of surprised myself that I began thinking that this was where God was leading me, to be a pastor,” he said.

Balsley, who grew up on a dairy farm, said he was involved in the Baptist church while growing up.

Balsley described the process of becoming a pastor as slow and gradual.

After graduating from Central College in Pella, Iowa, in 1978, Balsley returned back to his family farm. He began to be involved with church camp after returning home, where he met his wife, Angie. They married in 1982.

Balsley farmed for another 13 years until he entered Central Baptist Theological Seminary in Shawnee, Kansas, in January 1995 at the age of 39.

Balsley said that while leaving the farm was a hard decision, God called him to serve.

“God uses situations in our life to direct us and lead us to where he wants us to be,” he said.

Balsley was at seminary school for 3 1/2 years before moving to Albert Lea in August 1998, where he began serving as a pastor at First Baptist Church.

Interesting fact: was a dairy farmer until he was 39

Balsley said he is glad he and his family came to Albert Lea.

“I believe God called us here,” he said. “As a whole, it’s been a fulfilling call.”

Balsley said as he has aged he has developed more urgency to share Jesus Christ with other people.

“I would hope people would be encouraged knowing, obviously, the only thing that is going to matter in the end is their relationship with Christ,” he said.

Balsley said he hoped any members of the church would spread the word.

“I would hope they would find encouragement with their relationship with the Lord and be encouraged to go out and share their love of Christ with those who don’t know him,” he said.