Christmas 1965: A time of change for Albert Lea and the U.S. 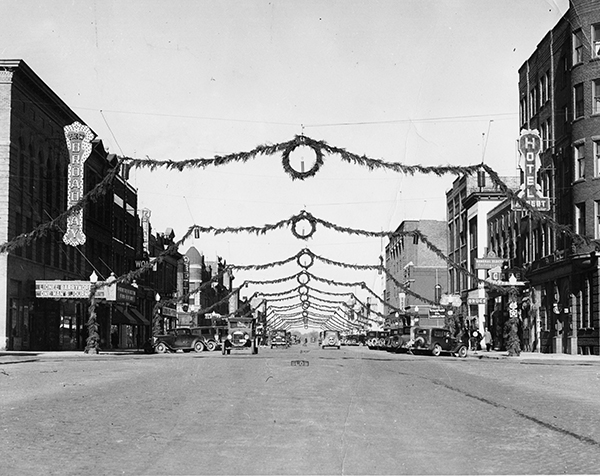 This photo shows Broadway in Albert Lea in 1933 or 1934. The Christmas decorations would become a downtown tradition, with the Chamber of Commerce soliciting donations for new garland and lights in 1965. – Photo courtesy of the Freeborn County Historical Society

Looking back 50 years at Christmas 1965, one sees a time of change. While life was bustling in Albert Lea, several of its young men were fighting in Vietnam, America celebrated the return of Gemini mission astronauts and the civil rights movement made headlines in the Albert Lea Tribune.

Change was apparent locally, too. On the west side of Albert Lea, Skyline Mall was going up — one of the first enclosed shopping spaces in the region. The mall would encompass about 200,000 square feet of space, cost $2.25 million to build and would provide parking for 1,500 cars. JC Penney and Montgomery Ward would move from their downtown locations to the new mall.

Further west of town, Lea College — a private liberal arts school — was under construction on the shores of Lake Chapeau. Other top building events for 1965 included the Good Samaritan Home, Northeast Junior High, warehouses, terminals and supermarkets, according to the Tribune.

Downtown Albert Lea was aglow with new decorations, thanks to solicitations by the local Chamber of Commerce. Placed by Interstate Power Co. crews in mid-November 1965, the lights and garland adorned light poles on both sides of Broadway, crisscrossing at the intersections of Clark, William and Main streets with three-dimensional stars in the center.

Popular toys in the United States were the iconic Barbie doll and her little sister Skipper — usually in matching outfits — and G.I. Joe action figures. Albert Lea shoppers could find these toys at the central Wal-Green drug store on the corner of Broadway and Main. The store advertised the G.I Joe fighting man for $3.19 and Barbie dolls for $1.88 each. For decorating, the drug store sold 25-light outdoor sets for $4.99 and indoor sets for $3.99, with 6.5-foot flocked Christmas trees at $14.88 each.

For adults, gift ideas included sweaters priced from $4.98 to $19.98 at St. Paul Clothing House on Broadway and Lady Sunbeam hair dryers for $15.88 at Bailey’s, complete with a carrying case for “plenty of extra room for rollers and bobby pins.” Several stores promoted electric tooth brushes — a new concept in dental care.

For holiday baking the Piggly Wiggly sold cake mixes four for $1, marshmallow cream for 19 cents a jar, sugar at 12 cents a pound and butter for 58 cents a pound. Shoppers could double their S&H trading stamps — one of the first retail loyalty programs. Retailers purchased the stamps from S&H and then gave them away to shoppers who collected them to buy items from the S&H catalog. The local grocery store also promoted six rolls of wrapping paper for 73 cents and eggnog 49 cents per 32-ounce can.

Change was also apparent in popular culture across the nation and in this Minnesota town of 18,351 people.

In New York the epic film “Doctor Zhivago” premiered during December 1965. The story, based on a 1957 novel by Boris Pasternak, followed two lovers who were torn apart during the Russian revolution. It would eventually win five Academy Awards. Other popular films included “The Sound of Music” and “My Fair Lady.”

In Albert Lea, Broadway Theater was showing “Hallelujah Trail,” a spoof of American westerns, while Rivoli Theater down the street was showing “Pinocchio in Outer Space” — an animated film that sent the character to Mars.

Popular music was transitioning from smooth crooners to serious songs that would help drive the beat of societal change. Top songs in 1965 included Frank Sinatra’s “Strangers in the Night” and the Beatles’ “Help!” In December that year, topping the record charts were the Byrds’ “Turn! Turn! Turn! (To Everything There is a Season)” and the Supremes’ “I Hear a Symphony.”

On Broadway in New York, one play that would become a classic was making its debut: “The Odd Couple,” a Neil Simon play about mismatched roommates.

In Albert Lea, an important legacy opened on the Southwest Junior High stage. Albert Lea Community Theatre presented its first-ever production on Dec. 2, 1965, “The Man Who Came to Dinner,” a sold out success.

On Saturday, Dec. 25, 1965, the temperature would reach 31 degrees in Albert Lea, church bells would ring in celebration and the city would be poised for change along with the rest of the nation.