Funeral services for Clara K. Jensen White will be at 2 p.m. Saturday at United Methodist Church in Ellendale. The Rev. Randy Cirksena will officiate. Visitation will be one hour prior to the service at the church. Interment will be in Geneva Cemetery. 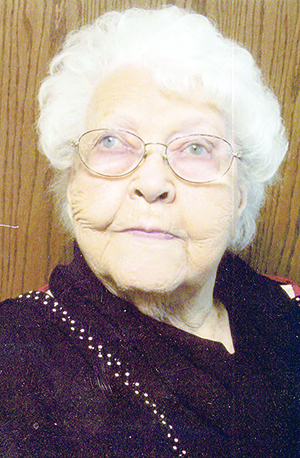 Clara K. Jensen White, who was 105 years and 4 months old, died Saturday, Dec. 5, 2015, at Care Center in Onalaska, Wisconsin, where she lived for several years.

Clara was born a full-blooded Swede on July 26, 1910, in Kiron, Iowa, to John and Anna Sward. She grew up in Iowa and attended school in Ida Grove. She married Gordon Jensen at First Baptist Church in Clarks Grove on Nov. 30, 1927, and they made their home in Geneva. Gordon died in 1961. Three years later, Clara married the Rev. John White, the United Methodist pastor in Geneva. They were married for 29 years until his death in 1993.

Clara was an active member of Geneva Methodist Church for many years. She was spiritual and devoted to her Bible reading and studies. Her closeness to God was undoubtedly her strength and devotion, and was why she lived so long.

Clara spent many years as a homemaker, taking care of her children as they grew up. Clara was an excellent seamstress and as a young mother she made many of her children’s clothes. She also crocheted many doilies and braided rag rugs over the years.

Clara loved to read and complete crossword puzzles. Clara’s uncle, Algot Forsberg, taught her how to do crosswords when she was around 10 years old. After her children left home, Clara worked as an office secretary at the Ellendale elevator. In her free time she enjoyed watching Turner Classic Movies as well as baseball games — especially the Minnesota Twins.

She always had a smile on her face and a good healthy laugh. When she came to the local senior citizens gatherings, you knew it would be a good day.

Clara went to live with her daughter, Joanne, in Onalaska. They were able to spend some special times together. They enjoyed going out to eat, as well as going to Riverside Park in LaCrosse where they were able to enjoy watching the boats, pontoons, barges and yachts. They spent a great deal of time driving around the countryside and enjoyed seeing all the different birds.

After Clara moved to Onalaska in 2004, Edwin and Norrine Jensen and Shirley Jensen from Ellendale and Dennis and Judy Jensen of Albert Lea would often drive to Wisconsin to visit Clara and Joanne.

Those left to cherish her memory include her children Edwin Jensen (Norrine) of Ellendale, Joanne Neuhart of LaCrosse and Dennis Jensen of Albert Lea; and her daughter-in-law, Shirley Jensen, of Albert Lea. Clara is also survived by 18 grandchildren, 37 great-grandchildren and 28 great-great-grandchildren. John’s two children, Ardis and Shelia, and their families also became an important part of Clara’s family. Ardis had two children, Garth and Neil, and they became the fathers of four girls.

In her appearance, posture, stance and in the way she talked and visited with people, Clara was a lady in every way. She had the poise and attitude of a queen. She could talk comfortably with children, strangers, friends and neighbors. Clara will surely be missed. She had been an active part of many lives for a long, long time.

Those who have given of themselves to others will live forever in each heart they have touched.