For some farmers, great harvests can bring on hard times 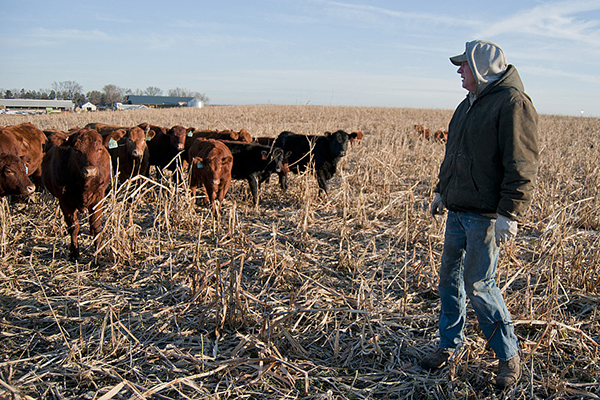 Grant Breitkreutz looks for any sick or injured cattle in his herd on his farm in rural Redwood Falls. – Jackson Forderer/for MPR News

Minnesota farmers can give thanks this holiday season for one of their most productive harvests in history. But the bounty has a big downside.

The record corn and soybean crops are causing prices to drop. And the financial pain has spread beyond the major grains to most sectors of the farm economy.

Earlier this decade, just about every part of farming saw record prices and profits. But then the markets turned, and now most sectors are struggling to make money.

Grant Breitkreutz has seen the impact of the economic downturn on his cattle farm in southwest Minnesota. He said he’ll really feel the pinch when he sells a group of calves in January.

“We’re anticipating fully $500 a head less than one year ago,” said Breitkreutz. That’s because the price of those calves has dropped by more than a quarter, from around $1,400 a head last year.

But Breitkreutz is doing better than most. He still expects to make a small profit on the calves, while many in the cattle business are losing money — oftentimes hundreds of dollars a head on cattle sold for slaughter.

The misery is enjoying plenty of company. Breitkreutz said it doesn’t matter which sector you look at — crop, livestock or dairy. Farmers in general are in a down cycle.

“We’re taking a severe dip here,” he said. “Everything has dropped substantially.”

Crop farmers probably are the hardest hit. Corn prices have dropped by half from the record levels of three years ago. Dairy farmers, though, are also struggling. Milk prices have been at or below break-even for most farms for the past year. Hog farmers are still making money, but just barely.

“The Minnesota ag economy is a vital player in the global market,” said Swanson. “And it can’t escape that cycle. Right now, supply is robust, and demand is a little bit questionable.”

Good harvests and livestock herd expansions are the main drivers on the supply side. China