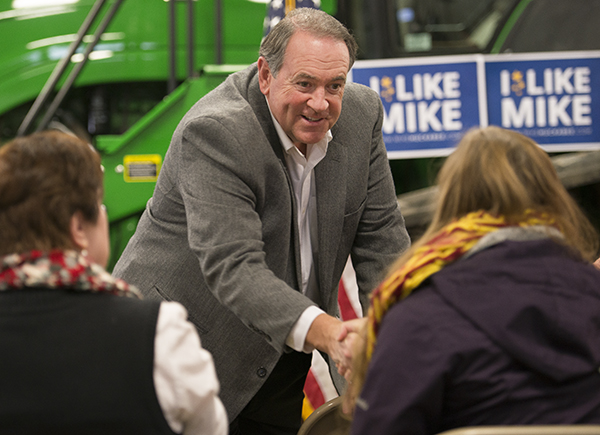 Mike Huckabee, a candidate for the Republican nomination for president, made the remark at a brief speech and question-and-answer session at Ag Power Enterprises.

His appearance came approximately a month and a half before the Feb.1 Iowa caucus.

Huckabee said the standard instituted by the federal government has been one of its only successful programs and has lowered gas prices by 16 cents.

He spoke against ending the standard, an idea that a number of Republican candidates have supported.

“This would be like pulling out the rug from the agricultural producers,” Huckabee said. 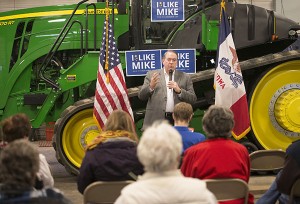 He framed his stance as essential to Iowa’s economic growth and said his fellow candidates aren’t as supportive of ethanol.

He briefly made small talk with the audience and AgStar employees prior to and following his presentation, and signed copies of his books.

Huckabee’s speech centered on his experience as a two-term governor of Arkansas and what he brings to the table as a candidate.

“I learned what it’s like to just make things happen, even in the face of intense and extraordinary pressure,” Huckabee said.

He said his political philosophy involves prioritizing what’s important and understanding that negotiation is key to governing well and said there’s two ways to work through a hostile government: following rules and building relationships.

He encouraged each member of the audience to vote for him in the Iowa primary.

Huckabee described his Iowa strategy of visiting all 99 counties before February.

“I still believe the way to win Iowa is the old-fashioned way,” Huckabee said. “You grind it out on the ground. You just go to communities, you talk to people, you ask for their vote, you get them to caucus for you.”

Huckabee’s stop was part of five he made in Iowa Tuesday as part of a two-day swing through the state. Other stops included New Hampton, Cresco, Osage and Forest City.

Huckabee described President Barack Obama as being “incompetent” and “divisive.”

“Obama made great speeches, but his decisions have been disastrous,” Huckabee said.

Huckabee said he has seen positive changes since his time growing up in the South during the Jim Crow era, and advised people to judge on the content of character, not on the color of skin. 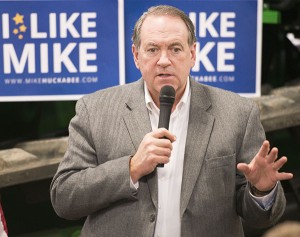 “We’d be wise to keep our eyes on China,” he said.

Huckabee said he supports retribution in the event of a cyber attack.

Huckabee said the Environmental Protection Agency is out-of-control and is making decisions that should be made at the state level.

Huckabee captured the 2008 Iowa primary before dropping out of the race in March 2008.

He said he is running to keep the country safe, to bring jobs back and to preserve a future for his five grandchildren.

He described Republican candidate Donald Trump as a “very interesting guy,” and said the two get along well. He described himself as being more prepared, qualified and ready to be president than Trump.

According to a Real Clear Politics poll taken from Dec. 14 to Thursday, Ted Cruz is leading the Iowa Republican presidential caucus with 30.2 percent of the vote. Huckabee was in eighth place at 2 percent.

Despite the results of the poll, Huckabee said the only poll that matters will be on Feb. 1.

“It was thrilling to see him,” Mielke said. “I’ve always liked Huckabee. He’s a good talker, he explains things very simply and I like his line of thinking.I like the way he looks at things.”