Man comes to A.L. as refugee, works in schools and courts 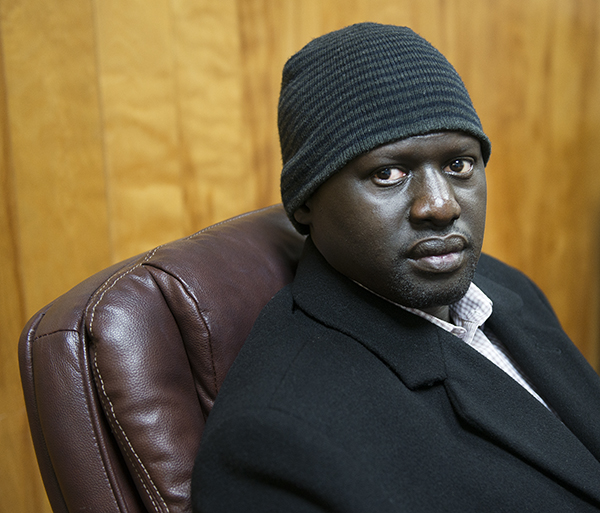 Chang Ruach, originally from South Sudan, came to the U.S. as a refugee in 1998. He became a U.S. citizen in 2005, and has been living in Albert Lea since 2011. – Colleen Harrison/Albert Lea Tribune

For one man, Albert Lea has become a second home.

Chang Ruach, 34, came to the United States as a refugee in 1998. Originally from southern Sudan — which in 2011 became the country of South Sudan — Ruach came to the U.S. from a refugee camp in Ethiopia, and has been a U.S. citizen since 2005.

Ruach moved to Albert Lea in 2011 after being in Austin to help a family friend. He lives in town with his wife, Chol, and their three children, ages 7, 5 and 3.

His first city of residence as a refugee was Omaha, Nebraska, where he got his high school diploma and then a degree in environmental studies from University of Nebraska-Omaha. Ruach said he first became interested in that field of study from the jungles and different animals he grew up seeing in Africa. He hopes to someday go back to school to learn different ways to combat deforestation and apply them to his own country, where wood is the main resource being used at a faster rate than it’s being restored or maintained.

Those plans have been put on hold due to the civil war that has been ravaging Ruach’s native country. After the country gained its independence in 2011, tensions in South Sudan have built over the past few years as South Sudan President Salva Kiir has dismissed and replaced numerous government officials. In December 2013, Kiir accused former South Sudan Vice President Riek Machar of attempting a coup after a shooting took place in the military barracks of the Presidential Guard. Machar, who left office in July 2013, denied the accusations.

Since then, government troops and tribal factions have taken over  throughout the country. Hundreds of people were reported dead within the first few days of fighting in Juba, the nation’s capital, as well as the surrounding region. Though some believe the conflict stems from tribal violence between the Dinka and Nuer people — Kiir is Dinka while Machar is Nuer — others have dismissed the theory. Ruach said that the conflict has largely come from Kiir’s transformation into a dictator.

Ruach still has family in South Sudan, including his parents, brothers, sisters and other extended family members. He has put his educational goals on hold to earn a living that can provide aid to his family currently living near the conflict, on top of providing for his own wife and children.

Currently a success coach for Albert Lea Area Schools, Ruach works out of Sibley Elementary School, Southwest Middle School and Albert Lea High School. His job consists of helping students who are struggling for various reasons and acting as a liaison between students, families and teachers. He also works as an interpreter in the school district, as well as for Freeborn County District Court.

Ruach has been back to his homeland twice — once in 2011 when it gained its independence and again in 2013 on a mission to build a clinic.

The Syrian refugee crisis is something the local refugee community has talked a lot about, said Ruach. He said the majority of refugee conflicts tend to hit home for him and his people.

“We always feel it,” he said. “We’ve been there. We’ve been in that same situation.”

Interesting fact: Ruach was 22 when he graduated from high school in Omaha, Nebraska, after coming to the U.S. as a refugee