Many factors can cause ice on lakes to be unsafe

Hockey players vie for ice time or playing time, but in winter there is another type if ice time: the time of year when our lakes and streams ice over and become safe for the folks to venture out on them. 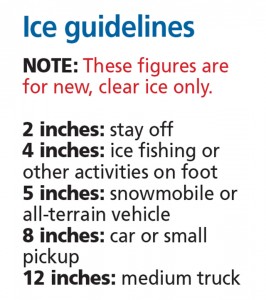 So far this winter season there are no bodies of water in our area with ice thick enough to be safe for even foot traffic. Although the weather has been well below freezing at times, any ice that may be covering our area lakes is definitely not safe for venturing out.

When is ice safe?

There is no sure answer. You can’t judge the strength of ice just by its appearance, age, thickness, temperature or whether or not the ice is covered with snow. Strength is based on all these factors, plus the depth of water under the ice, size of the water body, water chemistry and currents, the distribution of the load on the ice and local climatic conditions.

Many factors other than thickness can cause ice to be unsafe.

White ice or snow ice is only about half as strong as new clear ice, so double the thickness guidelines listed in the box when traveling on white ice.

Even though I am by far not the youngest kid on the block, I can still remember my days as an adventurous youth and the excitement that the first sign of an ice-over on the local slough would bring. The local slough had a creek flowing under it and moving water under the ice always makes things a little more risky.

The first ice on the crick was usually thin and crystal clear. I always found it quite fascinating to watch the water flowing beneath that clear ice, and I really didn’t give much thought to falling through until it happened, which was almost inevitable.

Walking next to the swamp grass and rushes could easily result in an overshoe full of water, and that was usually my downfall. I am not sure if I ever did return home dry after spending time at the slough, but regardless, it always seemed worth it.

As winter moved on, the ice became thicker and more snow-covered. It was always fascinating to me to follow the critter tracks. Guessing what animal made those tracks was a game shared by myself and whichever of my friends happened to be sharing the day with me on one of my winter adventures.

Children are naturally curious, and that curiosity, coupled with a deceiving first covering of ice, can be dangerous. With that being said, please remind your children to stay clear of the lakes and streams until they are safe enough to venture out on, and even then they should never venture out on lake ice alone.

Meanwhile, back at the ranch — meaning my small backyard — I have what is close to resembling a wildlife sanctuary of sorts. Over the summer, I accrued quite a brushpile of twigs and branches, thanks mostly to high winds and the two large maple trees that I have in the backyard.

My plan was to have a nice campfire in my portable firepit one nice fall day to clean up my yard. This, however, didn’t happen, mostly due to the strong steady winds we experienced this fall.

The upside to that brushpile still being there is that it has become a sort of haven for the neighborhood wildlife.

We have some resident rabbits and numerous squirrels that, with their winter coats, are almost the same size as some of the neighborhood cats. This is great, and these furry critters are definitely fun to watch. Speaking of watching, earlier this fall I spotted a turkey vulture sitting atop a telephone pole in my neighbor’s backyard. This caused me to wonder what it was so intently watching.

I have recently decided to put up a suet block in the tree next to our deck in the back yard. Although it isn’t a constant, at least once a day I have visitors in the form of sparrows, black-capped chickadees and nuthatches. There is also a downy woodpecker that makes at least a daily appearance.

I love watching the critters, and I especially enjoy watching the birds. In the spring and early summer, a suet block can only last about a day because of the numerous blackbirds, so I choose not to put anything in it. However, as soon as those pesky birds decide to move on, I will once again be putting the block out.

Until next time, take advantage of the mild weather we have been experiencing and also take a little time to enjoy the wildlife that you may find right in your own backyard.

Please remember to keep our troops in your thoughts and prayers, especially during the upcoming holiday season. They are the reason that we are able to enjoy all the freedoms that we have today.