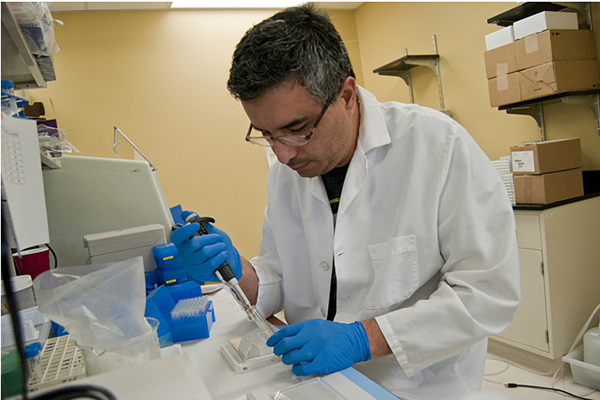 Cristian Flores prepares samples to be tested for the avian flu at the University of Minnesota Extension laboratory in Willmar. – Jackson Forderer/for MPR News

The avian influenza strain that killed more than 9 million Minnesota turkeys and chickens last spring behaved like no other and fooled the industry into making some mistakes. It was a devastating season.

Now, with the industry mostly recovered, researchers are working to make sure the virus won’t outmaneuver them again.

That work starts at the University of Minnesota Avian Research Center’s labs in Willmar, where samples from a turkey barn are being processed behind a protective glass hood. An assistant scientist wearing a blue lab coat reaches underneath the hood and squirts liquid on a soiled cloth swab. 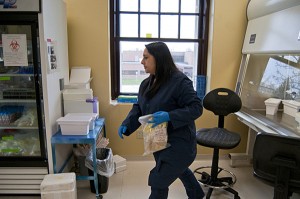 Assistant scientist Jeannette Munoz takes a bag of gauze that had samples extracted from it back to cold storage. -Jackson Forderer/for MPR News

Jeannette Munoz is handling a potentially infectious material, so lab visitors are warned to keep their distance.

Munoz takes the swab, adds an activating chemical and then sheds a little of the “juice” from the swab into a test tube. The “juice” is essentially the scummy fluid that sticks to the bottom of a turkey drinking trough.

A few years ago, the center’s director, Carol Cardona, discovered that this bird backwash can harbor respiratory viruses in a flock.

“I went out and sat in a turkey barn and counted how many birds came and drank,” she recalled. “It was about 50 birds that came and drank in a half an hour from a single drinker. And so we’re getting a big sample without the producer having to go sample that many birds.”

Testing the scum for flu virus is a blunt detection tool. The test doesn’t specify which strain of the virus is present; most are not deadly to poultry. But in this time of heightened anxiety about the possible return of highly pathogenic H5N2 flu, the state poultry industry wants to shut down any flu cases it finds quickly.

“We don’t want to move any flock that may be shedding virus and this (test) helps prevent that from happening,” said Steve Olson, executive director of the Minnesota Turkey Growers Association.

The industry has ramped up this testing after realizing the H5N2 virus is different. A similar, related strain kills birds within 24 to 48 hours. But the Southeast Poultry Research Laboratory in Georgia found that birds can be infected with H5N2 for five to six days before they appear sick and die.

That longer incubation period gives the virus more time to spread within a flock and to nearby operations. And it means farms are at greater risk of sending infected birds to market.

Cardona said the new research rattled the industry because it means poultry producers need to be even more careful about moving their birds. “They need to know (about their flu exposure) right away,” she said. “The faster that we figure anything out, the better.”

Prior to H5N2, turkey farmers would test their flocks for flu about two weeks before shipping them. But this fall, the industry bumped up its testing to just one day before birds are moved.

That’s made Cardona’s center as busy as ever. 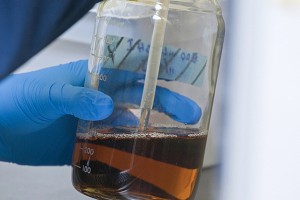 Tony Wertish draws liquid out of a jar to add to the gauze samples that were dropped off at the University of Minnesota Extension laboratory by turkey growers. – Jackson Forderer/for MPR News

“It’s been really hard, this problem. We are trying to do our best to help,” said lab manager Cristian Flores, who had to hire a third employee to handle the workload. “Sometimes it means that we have to be around weekends, extra time, but it’s part of the research that we’re doing. So it’s important to have these results.”

So far there hasn’t been a hint of avian influenza in Minnesota poultry this fall. Cardona, however, believes the warm fall likely delayed wild bird migration, so her lab will continue its testing until the high-risk period for avian flu passes.

A few months ago she would have said that was probably in December, but there’s so much uncertainty about where the virus is that her team may keep testing farm samples through the spring.

“The polar air masses now kind of driving down the snow flurries outside make us all nervous as Canadian birds start moving down,” she said. “We really have no idea what the threat is. So we’re just doing everything we can to make sure that the threat doesn’t turn into a reality.”