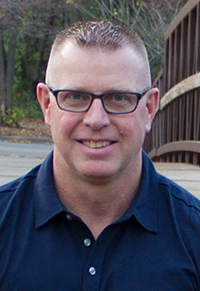 Mitch was born Oct. 31, 1966, in Albert Lea to Clair and Charlene (Petersen) Jenson. He graduated from Albert Lea High School in 1985. After graduation he joined the United States Marine Corps, where he proudly served for 24 years. While in the service he married Shari Godtland and together they raised one son, Jordan.

During his military career he was assigned to numerous Marine bases around the world. His favorites included Camp Pendleton in Oceanside, California, and Camp Foster in Okinawa, Japan. Throughout his highly-decorated military career he held many honorable positions: drill instructor, accident reconstructionist, provost sergeant and deputy provost marshall. In 2008, he was honored to be selected to attend the National FBI Academy. Upon retiring as a master gunnery sergeant he moved to Rochester where he started his civilian career as a Rochester police officer.

In 2009 he met the love of his life and best friend, Alissa Abrams. They were united in marriage on June 23, 2012, in Albert Lea. Together they raised one daughter, Brooklyn. They enjoyed riding their Harley Davidson, golfing, traveling all over the world and attending Brooklyn’s activities. He loved his three dogs, Charlie, Lucy and Kirby.

Mitch devoted his life to his family, Marine Corps family and Rochester Police Department family. He will always be remembered for being a guardian to his Marine brothers and sisters and also to his Rochester Police Department brothers and sisters. He will be remembered for his inability to use his indoor voice and his loud laughter.

A funeral service will be at 2:30 p.m. Sunday at Mount Olive Lutheran Church, 2830 18th Ave. NW in Rochester.  Visitation will be from 5 to 8 p.m. Saturday at Ranfranz and Vine Funeral Homes in Rochester and one hour prior to the service Sunday at the church. Burial will be in Fort Snelling National Cemetery.