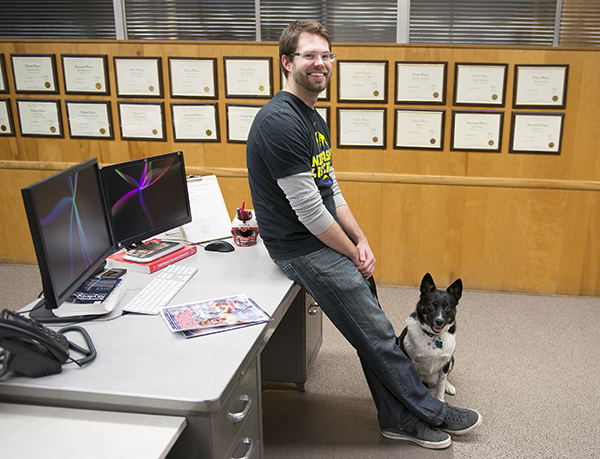 Micah Bader, pictured at his desk with his dog Josie, will finish his last day as the Tribune’s sports editor on Friday. – Colleen Harrison/Albert Lea Tribune

After three years as the Tribune’s sports editor, Micah Bader has decided to take the next step in his journalism career.

Starting Dec. 21, Bader will be the editor at the Dell Rapids Tribune in Dell Rapids, South Dakota. The paper is one of two satellite weeklies of the Argus Leader in Sioux Falls, South Dakota — all of which are owned by media company Gannett.

His last day at the Tribune is Friday, and as it approaches Bader took time to look back on the last three years in Albert Lea.

The NRHEG girls’ basketball team’s back-to-back state titles with star player Carlie Wagner stick out for him, especially as he has gotten to cover Wagner in her collegiate career with the Minnesota Gophers, as well.

“She’s going to go on to do great things,” he said.

In his three years with the Tribune, Bader has won four Minnesota Newspaper Association awards for his sports writing and photography.

Before working at the Tribune, Bader worked as a sports editor for Vinton Newspapers in Iowa. During his 1 1/2 years there he won three awards from the Iowa Newspaper Association for his sports writing and photography, as well.

Bader, now 28, lived in Minnesota until he was 10, before moving to Nebraska with his family. He got his bachelor’s degree from the University of Nebraska-Lincoln, where he majored in news-editorial journalism and broadcast news and minored in political science.

Out of all the jobs he has had — from working for different news outlets to landscaping to delivering pizzas, to name a few — Bader said his job at the Tribune has been his favorite.

“I’ve appreciated everybody who’s helped me with stories while I’ve been here,” he said.

Bader’s new job will involve covering not just sports, but crime and community news as well. While it’s a bit out of the norm for him, he said he’s excited at the prospect of something different.

The decision to leave Albert Lea wasn’t an easy one for Bader, and while he’s excited for his new job he said he’ll  still miss many aspects of being the Tribune’s sports editor.

He’s especially grateful for the people who have helped his career along the way, such as Tribune Managing Editor Sarah Stultz and Publisher Crystal Miller. He also asked that the community be patient with whoever fills his position, as the relationships with coaches, athletes, parents and other sources is something that takes time to build.

“It’s been a lot of fun — meeting people, getting to know them,” he said. “Three years doesn’t seem that long, but you really get to know the people and the area.”