Funeral services for Olive M. (Sonnek) Hefner will be at 10:30 a.m. Monday at St. Theodore Catholic Church in Albert Lea. The Rev. Russell Scepaniak will officiate. Interment will be in St. Casimir’s Cemetery in Wells. Friends may visit with family one hour before services at the church. Bonnerup Funeral Service is assisting the family. 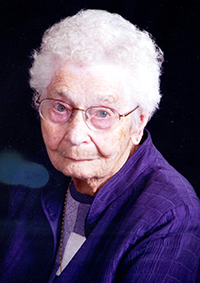 Olive was united in marriage to Leo Hefner on Nov. 25, 1941, in Wells. They lived in Easton and Wells and later made their home in Albert Lea.

She had worked at Mallons Egg Processing Plant in Wells.

Olive had been a member of the Union Center in Albert Lea, where she helped serve many meals.

She was also a member of St. Theodore Catholic Church.

In earlier years, Olive and Leo had the opportunity to enjoy traveling.

She also enjoyed baking, playing cards, gardening and was a part of the Coffee Clutchers group.

Her many nieces and nephews, whom she loved dearly, were her “little chicks.”

Olive was a true animal lover. Her cats, Poncho No. 1 and Poncho No. 2, were also dear to her.

Olive is survived by brother, George (Pat) Sonnek, of Wells; sisters-in-law Marion Sonnek, Victoria Sonnek and Bernice Sonnek, all of Wells; brother–in-law, Ralph Huxford, of Waseca; and many nieces and nephews.