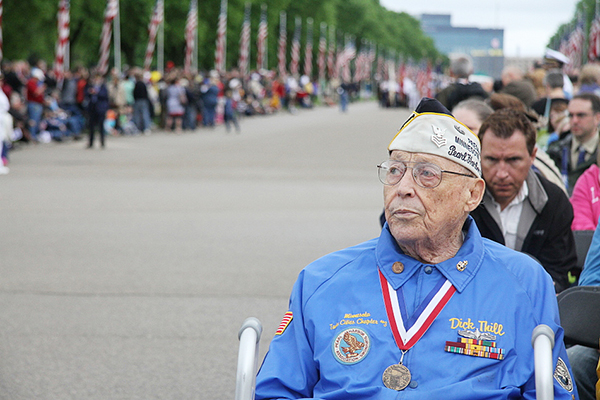 Man was on ship that fired first U.S. shots in World War II

Today marks the 74th anniversary of the surprise attack at Pearl Harbor. More than 2,400 Americans were killed when Japanese planes bombed the Hawaiian naval base during World War II.

There aren’t many survivors left in Minnesota — or across the country. Richard Thill, 92, of St. Paul, is one of them. Thill is president of the Twin Cities Chapter of Pearl Harbor Survivors. He said that, at one point after the war, there were more than 500 survivors in Minnesota.

Today, he only knows of one other in the state.

Thill will be the guest speaker at Minnesota’s Pearl Harbor Remembrance Day ceremony at the Cedar Street Armory in St. Paul. The program includes a performance by the Kerkhoven-Murdock-Sunburg Marching Saints band, which has been selected to perform as part of a collective band at the 75th anniversary commemoration in Hawaii next year, and the Fort Snelling Memorial Rifle Squad. Gov. Mark

Where was he during the attack?

Thill, then 18, was part of the crew of about 140 aboard the destroyer USS Ward, the ship credited with firing the first American shots of World War II. Among them were 84 Minnesotans, serving in the Naval Reserve. Thill and his shipmates were on a routine patrol of restricted waters outside the harbor’s mouth when the attack began.

About an hour before the attack, they fired upon — and sank — a Japanese midget submarine.

Today, the gun that was mounted atop the Ward’s midships deckhouse sits on the State Capitol grounds, on the west side of the Veterans Service Building.

Did he think he’d make it out alive?

Thill thinks the inexperience of young Japanese pilots may have saved his life.

Two planes flew overhead side by side, leaving a gap in between them, instead of flying in a single file. The space was just enough that the bombs they dropped fell to either side of the ship.

“If they’d gone single file, they’d have sunk us right there,” he said.

Kazuo Sakamaki was the first Japanese prisoner of war captured by American forces in WWII when his midget submarine ran aground during the attack.

Thill said he didn’t hold any ill will toward him.

“He’s a Navy guy doing his duty for his country. He didn’t have any choice,” he said.

It was all because of a hat.

Thill said he was 16 and “liked the idea of having a Navy cap, a white hat.”

“I thought that’d be cool to have,” he said.

His father asked an officer in the Naval Reserve, who told him the only way he could get one was to join the reserve.

So his father embellished Thill’s age to 17, and he enlisted.

“I got my hat. I got the whole uniform. And then, of course, the responsibility comes with it,” he said.

He gets fan mail

At his St. Paul home is a big pile of letters from around the world.

“All these people want my autograph,” he said.