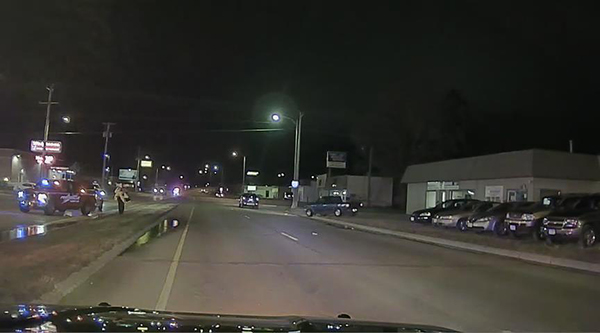 An image from an Albert Lea Police Department squad car shows a blue truck pulling onto the road. The truck is a suspect vehicle in a fatal hit-and-run crash that happened Wednesday night on East Main Street. – Provided

A pedestrian died Wednesday evening after what authorities are calling a hit-and-run crash on East Main Street in Albert Lea in front of McDonald’s.

The Albert Lea Police Department is asking anyone with information tied to the incident to contact police at 377-5200, according to a news release.

Police received a report of the crash, at the intersection of East Main Street and Katherine Street, at about 6:30 p.m.

Upon arriving at the scene, officers found a person deceased at the scene. The crash appeared to have occurred in the westbound lanes.

The suspect vehicle is described as a blue Ford pickup. It would likely have damage to the front driver’s side,  specifically to the orange marker light.

Officers on scene are awaiting a crash reconstructionist from the Minnesota State Patrol.

No information has been released about the person who died.