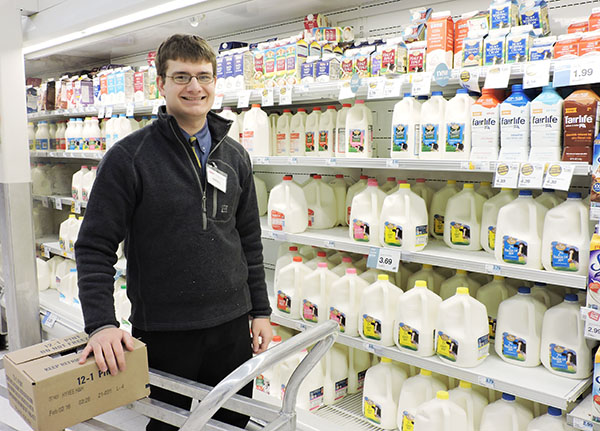 For many high school seniors, graduation is an exciting time to embrace the future. For others, it will mean walking with your class, yet not accepting your diploma so you can continue to receive the transitional services you need to succeed.

Does the program erase the disability? No. What it does do, according to teacher Lori Nelson, is focus on different areas in which these students may struggle. The program teaches everything from money management skills, such as balancing a checkbook and writing a resume, to food preparation and help in acquiring a driver’s license. The program also allows students to learn in a variety of environments and with outside agencies such as Cedar Valley Services, which will aid them in gaining employment.

Nelson recently reached out to a former student and transitions program alumnus to return and share his experiences with current classmates. During an open discussion led by Nelson, Austin Carlson, 22, provided the class with a voice that echoed some of the same concerns the students had, but delivered information in a form that is sometimes more effective than an adult. To the students, Carlson is a peer.

Like many of the students in the program, Carlson was diagnosed with an Autism Spectrum Disorder. Carlson was classified as having Asperger’s Syndrome, a highly-functional form of the developmental disorder, at about the fourth-grade level.

At the time, Carlson’s mother, Vonnie Kermes, noted Autistic students were sent to Sibley. Knowing how hard transitions were for her son, she instead advocated for Halvorson’s staff to adapt to her son. From there, Carlson would attend Southwest Middle School and then Albert Lea High School.

He was frank with the students about how he felt about his approaching graduation and transition into adulthood.

“Does anyone remember that rumor that the world was gonna end in 2012? I was kind of hoping that would happen,” Carlson said.

He pushed off planning for the future, despite its inevitability. Not only does change cause him a great deal of stress, he didn’t want the responsibilities of an adult. For him, it was a last-minute decision to go into the transitions program, which he attended for a year.

He worked with Cedar Valley in a data entry position created for him due to his higher level of cognitive functioning. The following year, he would enroll in an online program at Riverland Community College. The first semester he passed; the second he did not.

Kermes said when he’s ready for the program, he can do it. But at the time, he just wasn’t ready yet.

As a mother, she was always there to encourage and push him though.

Carlson told the students that included things like getting a driver’s license.

He explained that he had a copy of the Rosetta Stone program to learn Japanese. He pledged to his mother that he would drive for one hour for every lesson she did on the program. Carlson figured she would get tired of it and just quit. Before long, he owed her 20 to 30 hours of driving. The duo compromised when the hours exceeded reasonable limits. Instead, whenever he and his mom went somewhere, he was expected to drive.

It took some taunting from another boy with a license before he finally took the test just wanting to prove it wasn’t that hard. However, he also admits he still doesn’t like driving.

It’s a normal part of his life now that he’s working. After he failed to realize how much he really did need money, his mom sat him down and explained the family budget. She also gave him an ultimatum: if he wasn’t in school, he needed to help pay rent if he was going to continue to live with her. With his savings from his job at Cedar Valley soon depleted, he faced the stress of getting a job.

He didn’t do it alone though. Kermes said Sue Draayer of the Workforce Center helped Carlson get a job at Albert Lea’s Hy-Vee, where he works in the dairy and frozen food sections. According to her, the job has not only given Carlson a paycheck, it has helped him develop socially. In the beginning, he just focused on the job at hand. A year later, he is happy to show customers where to locate items of the shelves.

As for Carlson’s future, he’s not exactly sure. Now that he understands how much student loans can be, he likes the idea of saving for school and returning to Riverland to continue his education.

Nelson praised Hy-Vee for being open to hire people with disabilities and could see Carlson having a successful career there if he chooses to stay there and work his way up.

As for Carlson’s mom, she just celebrates the small accomplishments and appreciates just how big they are for her son.