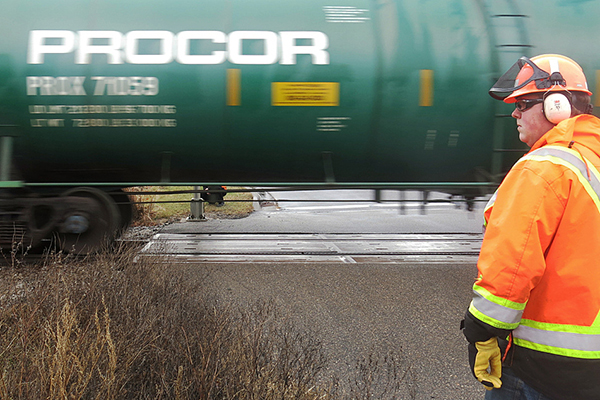 Rich McCumber drives a truck onto a rail crossing and lowers the small steel wheels onto the rails. Then it’s off down the track at about 20 miles per hour, his eyes straight ahead as he talks.

“This stretch of track I do three times a week,” he said, as he searches for loose spikes, missing bolts, broken switches or anything else that could compromise the rails and potentially send a freight train crashing. “Three times a week over it. I learn my territory by heart.”

He tries to average 40 miles a day of mainline and must also keep watch over 13 additional lesser used tracks that are not inspected as often. It’s a daunting job, one that gets little attention but carries enormous weight in an era of high-volume oil train traffic and rising state and federal concern over rail safety.

Train derailments can turn deadly, especially if train cars are loaded with hazardous materials. A third of all derailments are caused by a problem with tracks. Small problems like loose spikes or tiny cracks in rails can lead to big accidents. Visual inspections of rails are the first line of defense against disaster.

Canadian Pacific has done 28,000 visual inspections so far this year in Minnesota and found 7,000 problems, said Scott Paradise, the railroad’s chief engineer for track and structure, as he rode in the back seat of McCumber’s truck during the Wright County inspection.

“That’s 7,000 times we’re finding something that we can either protect through a slow order or correct through planned maintenance,” said Paradise, adding that CP’s maintenance spending — $46 million on track repairs this year in Minnesota — is higher than at any time in his 20 years with the company.

A broken rail is often caused by a small flaw or crack inside the rail. It grows unseen over time until the rail splits apart under passing train wheels.

Those defects begin before they can be seen, so the inspection work also includes a special rail car equipped with ultrasonic gear to look for cracks in rail. Canadian Pacific performs six rail flaw inspections annually on its main track, more than what federal law calls for, Paradise said.

The railroad also uses a specially equipped train car to test track geometry several times a year. The car measures distance between rails, and rail alignment. Rails that are out of alignment cause increased wear and lead to rail failure.

Federal regulators, however, are pushing for railroads to scan rails for flaws every day using devices that could be fitted on every locomotive.

“We need to continuously collect data, we need to analyze and and we need to do the trending so we can predict exactly how much life is in a rail and when it’s susceptible to breakage,” said Robert Lauby, chief safety officer with the Federal Railroad Administration.

That change will take time, but continuous monitoring is the way to reduce accidents caused by broken rails, he said.

Railroads are always working on techniques to make rail last longer, Paradise said as he walked a section of track explaining how carefully grinding the top of the rail keeps just enough wheel to rail contact.

“You want the tread of the wheel to be firmly on top of the rail,” he said. “We usually describe it as a dime, little bit larger than a dime. When you see a wear pattern like this it really is a preferable wear pattern.”

Reducing friction between rail and train wheels extends the life of the rail and saves fuel.

Canadian Pacific and other railroads also use lubricants on the rail in some areas to reduce friction. And the steel used in rails has improved. Despite rail cars getting heavier and traffic increasing, the average lifespan of rail has increased.

The Federal Railroad Administration, however, says broken rails remain a leading cause of accidents and that many defects that cause accidents aren’t being identified in time.

The FRA found a February oil train derailment and fire in West Virginia was caused by a broken rail. Investigators found the defect that cause the broken rail was missed by the railroad during two inspections.

The agency will push for increased training of inspectors who monitor rail scanning equipment and better use of software to compare inspection data over time and identify when a crack is growing, Lauby said.

The solution, he added, isn’t more regulation but higher expectations in the form of performance standards, “look at the results and hold them accountable for certain failure rates to make sure those are low and decreasing.”

“We do get into some healthy debates at times about the appropriate time and scheduling of maintenance,” he said. “But I can tell you that there is nobody that would ever provide pressure internally to not take the appropriate action for a legitimate safety condition.”