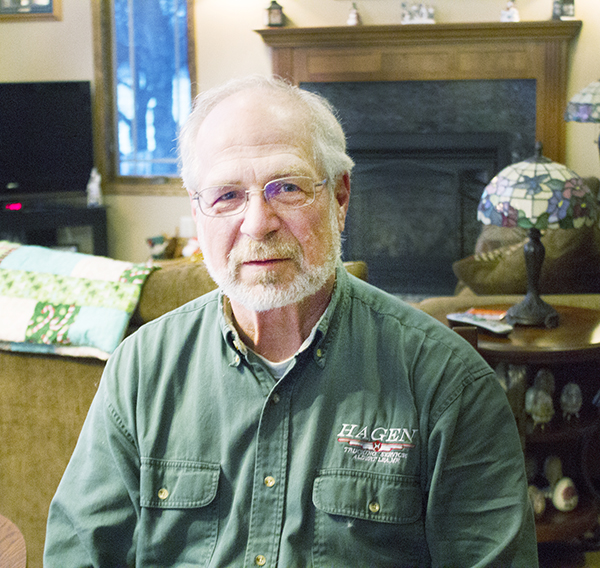 Albert Lea resident Gary Hagen is reaping the rewards of a life spent behind the wheel. – Sam Wilmes/Albert Lea Tribune

A longtime Albert Lea resident has built a career and a new home from trucking for more than four decades.

Gary Hagen, 64, a New Richland native, graduated from New Richland High School in 1969. He enlisted in the Army just before graduation.

Hagen was sent to basic training at Fort Lewis in Washington the day after graduation, and then to Fort Ord in California for individual training.

Following a two-week stay at home, Hagen was deployed to Pirmasens, Germany, in December 1969, where he was promoted from a private to a sergeant in charge of a top secret repository that logged, maintained and controlled top classified documents.

Hagen spent two years in Germany before leaving the Army in December 1971.

He attended Minnesota State University, Mankato and worked for a local construction company in the summer.

His trucking career then began.

Hagen was a trucker for Emil Olson Construction from 1972-82, where he ran heavy equipment.

From 1982 to 1995 he was a trucker for Barry Jacobson Trucking, a local tanker company, and from 1995 to 2002 he worked for Lawrence Transportation, delivering local short haul deliveries for various companies.

He originally hauled to a nine-state area for Serta Mattress Co., including Illinois, Iowa, Kansas, Missouri, Nebraska, North and South Dakota and Wisconsin, before shortening it to between Albert Lea and the Twin Cities.

Hagen said his career has given him a unique perspective on life.

“It’s a solitary life that you have to figure out how to be self-reliant,” Hagen said, “It’s a place where I’ve made all my life decisions, because I’m out there all by myself.

“Whether it’s the particular delivery I’m making or the purchasing and building of this home, it was thought about traveling down the road.”

Hagen and his wife, Joanne, moved into their new home overlooking Fountain Lake on Albert Lea Street in 2014.

He attends every Albert Lea City Council meeting and said the meetings are crucial.

Hagen said attending the meetings gives him an opportunity to keep local leaders in check and advised anyone with any questions or complaints to attend meetings or write letters to the letter.

“Those meetings are important to me, because there needs to be a certain amount of control,” Hagen said.

He said he doesn’t have a lot of spare time, but when he does he enjoys attending local car shows.

He said he lives by a philosophy.