Rising number of foreign students hitting the books in Minn. 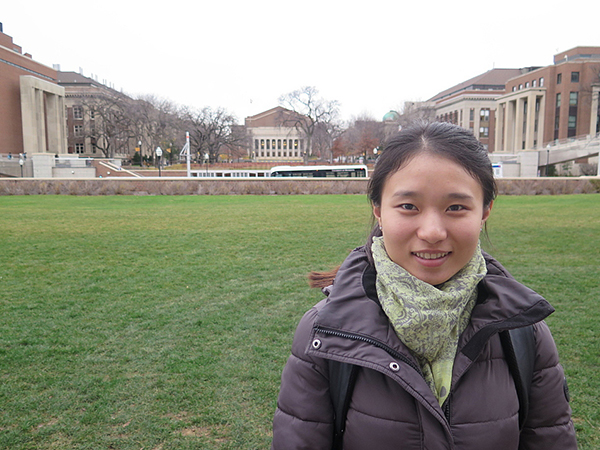 Sai Wang, a junior at the U of M who transferred from a school in China, said she came to study in the U.S. because of the value of an American diploma. She’s among nearly 7,000 international students at the U, a number that’s doubled over the last decade. – Peter Cox/MPR News

Even with college costs rising faster than inflation, the number of students from abroad coming to Minnesota’s colleges and universities continues to rise.

Nearly 14,500 students from abroad are studying at Minnesota colleges and universities this year, up more than 60 percent since 2007, following a nationwide trend.

Sai Wang is a native of Shenzhen, a city in China’s Guandong province. This year she’s studying marketing and communications at the University of Minnesota. She plans to earn bachelor’s and master’s degrees from the U and then return home, where she said there’s a premium on American diplomas.

“My classmates from my previous school still say when they are finding a job they feel like people who have the experience of studying abroad have the advantage,” she said.

Allan Goodman, president and CEO of The Institute of International Education, which produces the annual report, said that’s significantly more than last year. “There was a 10 percent increase in the number of international students coming to America,” he said.

Rising incomes overseas, coupled with the perceived value of a U.S. degree, are drawing students to American schools, he said.

The university has nearly 7,000 international students, up from fewer than 3,500 a decade ago.

U of M graduate and Regent Michael Hsu is the son of an international student who came to the university in 1948. “Believe it or not … in 1948, the University of Minnesota had a reputation in China,” he said.

Hsu’s father got his master’s and Ph.D. at the U of M. He went on to teach aerospace engineering at Iowa State University for 35 years.

“From the university’s perspective, I think we want to develop those relationships and also try to get the best and the brightest to come here, and hopefully keep them here,” Hsu said.

That means they’re paying full tuition — a pretty good deal for schools, which often deeply discount their sticker prices with grants and other aid for U.S. students.

Cynthia Yang, who works in the admissions office at Gustavus Adolphus College in St. Peter, Minn, said the college made a concerted effort about five years ago to begin recruiting students from abroad, making her a full-time international recruiter.

This fall, Yang spent more than six weeks recruiting in areas that produce some of the largest numbers of these students.

Gustavus’ student body reflects those efforts. The school now has 90 international students, up from 26 in 2007.

Yang said another reason for the international push is that overall undergraduate enrollment in Minnesota is declining. From 2010 to 2014, the number of undergraduates fell by 12 percent.

U.S. demographics are changing, she said.

“You don’t have a large number of high school students going to college, more so than you did 10 years ago,” she explained. “Admissions offices across the U.S. are looking for different ways to continue to fill seats and recruit students and whatnot. … So I think international is kind of the natural transition.”