A memorial service for Rozella L. “Rose” Engelby will be at 1 p.m. Saturday at St. Luke Lutheran Church in Goodhue. The Rev. Regina Hassanally will officiate. Friends may call an hour before the service Saturday at the church. Burial will be in Rose Hill Cemetery in Wells.  Rozella, 89, of Rochester died Thursday, Dec. 24, 2015, at her home peacefully with all her daughters and son-in-law present.

Rozella Lavonne Anderson was born Dec. 19, 1926, in Geneva to Frank and Veda (Campbell) Anderson. She was raised in the Bricelyn area and attended country schools before graduating from Bricelyn High School. 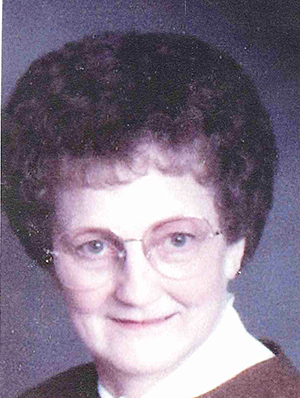 On April 8, 1944, she married Jerome B. “Jerry” Engelby in Mankato. The couple lived in Rake, Iowa, for five years, then in Wells for four years. They moved to Goodhue, living there for 28 years. After her husband’s retirement from Midwest Breeders Association the couple lived in Wells and Waseca for a total of 15 years, before moving to Rochester in 2000.

Rozella was a member of St. Luke Lutheran Church of Goodhue where she served on the church council, was a Sunday school teacher and was active in church affairs. She enjoyed sewing, baking, hardanger embroidery, china painting and remodeling among many other talents she had.

Survivors include daughters Paulette Engelby of St. Paul, Roxane Bang of Seattle and Trudy (Scott Soffa) Engelby of Rochester; grandchildren Joshua and Jessica, both of Seattle; and great-grandchildren Andrew, Reagan, Grace, Ethan and Loren all of Seattle.

She was preceded in death by her parents, Frank and Veda Anderson; husband, Jerome, who died July 11, 2005; her son, Larry; four brothers; and four sisters.

The family would like to give a special thank you to Rozella’s doctor, Nina Schwenk, and Mayo Hospice.