Steven Samuel Stoneback, 69, of Alden died Thursday, Dec. 17, 2015, at Mayo Clinic Health System in Albert Lea after struggling with multiple sclerosis for many years. A funeral service will be at 11 a.m. Monday at Redeemer Lutheran Church in Alden. The Revs. Nancy Overgaard and Sharon Nelson will officiate. Visitation will be from 2 to 5 p.m. today at Bruss-Heitner Funeral Home in Wells. Visitation will continue one hour prior to the service at the church on Monday. Military honors will be accorded by Alden American Legion Post 404. Bruss-Heitner Funeral Home in Wells is in charge of arrangements. To leave an online condolence, please visit www.brussheitner.com 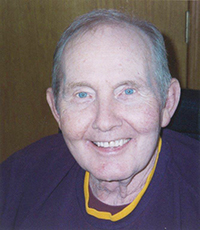 Steve was born Jan. 24, 1946, in Albert Lea, the son of Vance and Marian (Quam) Stoneback. He farmed near Alden for most of his life. Steve honorably served his country in the United States Army Reserves. He married the love of his life, Mary Paulson, on April 6, 1968, and to this union two sons were born, Mark and Wes. He was a member of Alden American Legion Post 404, where he served as the chaplain for many years, and Alden United Methodist Church. He was an avid Minnesota sports fan and enjoyed spending time with his friends and family. He especially treasured time with his three grandchildren.

He was preceded in death by his parents; grandparents; and brother, Jon Stoneback.