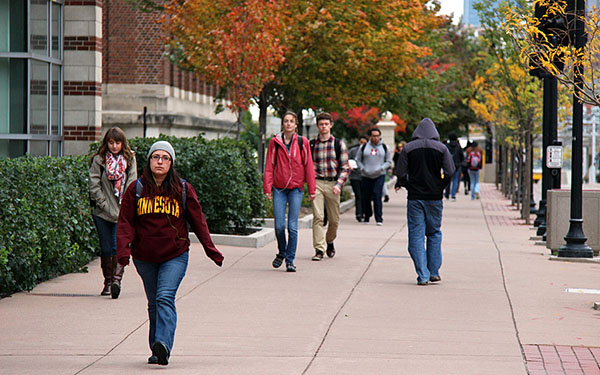 A health survey from the University of Minnesota shows that while high-risk drinking and smoking rates are down, the number of students reporting mental health conditions and sexual assaults have climbed. Here, university students and workers walked through the Minneapolis campus on Oct. 12. Russell Barnes/MPR News

A new survey from the University of Minnesota shows that while smoking and high-risk drinking have gone down, the number of students reporting mental health conditions and sexual assaults have climbed.

The 2015 College Student Health Survey results show about 32.7 percent of students say they’ve been diagnosed with a mental health condition, up from 25 percent in 2007. Students reporting they’ve experienced sexual assault in their lifetime increased from 23 percent in 2013 to 32 percent in this year’s survey.

“The rates are highly concerning that we would see one in three female students having experienced a sexual assault at some time in their lifetime,” said Gary Christensen, chief medical officer at Boynton Health Service.

However, Christensen and others believe the increased assault numbers could be the result of increased awareness.

Katie Eichele, director of the Aurora Center, a resource center for students who’ve experienced or are concerned about sexual assault, said all incoming students now take an online course on sexual assault.

“Because of stronger education and awareness efforts put on by colleges now, more and more students are able to actually identify if they’ve experienced sexual assault,” Eichele said.

As for mental health, Christensen said the higher numbers may be both good and bad.

“On the negative side, the rate is going higher, but on the positive side, it may be related to some variables such as more people actually feeling willing to go out and get some assistance,” he said. “Some of our anti-stigma efforts may actually be working well and bringing more and more people to services.”

The survey also asked questions about alcohol and drug use, and sexual activity. About 6,000 students on the Twin Cities campus were randomly selected to participate and about 34 percent responded.

“The tobacco rates on the Twin Cities campus for daily use has continued to decline, and that’s really good,” said David Golden, director of public health and communications at Boynton.

“The number that we get concerned about is high risk drinking and that has been just ticking down slowly,” he said.

The survey found 33 percent of students said that in the past two weeks, they’d participated in high-risk drinking — having five drinks or more in a single sitting. That number is down from 43 percent in 2001.

One of the questions asked in the survey for the first time this year was whether students felt they had enough food. Twenty-two percent responded that they feared they’d run out of food before they had money to buy more.

“Food is maybe an issue that they do try and stretch, like adults who don’t have enough money will feed their children at home first and not eat themselves,” she said.

Christensen said the campus may need a food shelf.

“We’re now challenged to grasp with our location right in the heart of a metropolitan area, are there already resources available that we could direct students to, or do we need to produce our own?” Christensen said. “Or do we need to look at some other aspects that might be affecting food security?”

More data from the survey is expected in early 2016. For the first time, the survey asked whether students experienced childhood trauma and how well they deal with stress.