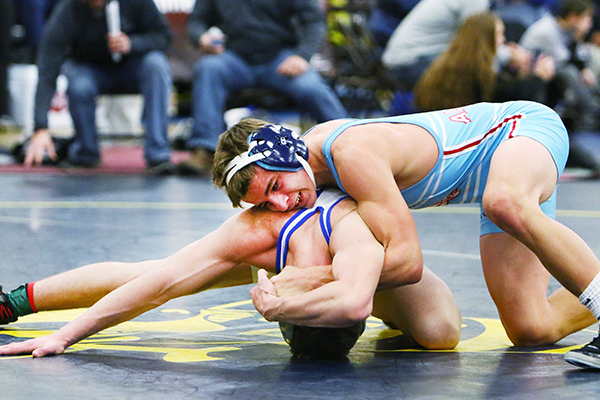 Albert Lea’s Garrett Aldrich wrestles at 132 over the weekend in the Minnesota Christmas Tournament at Rochester Technical and Community College. Aldrich went 4-2 at the tournament and placed fifth. – Pam Nelson/For the Albert Lea Tribune

The Tigers faced adversity on the mat, possibly for the first time this season.

The Albert Lea wrestling team competed as individuals Friday and Saturday in the Minnesota Christmas Tournament at Rochester Technical and Community College. 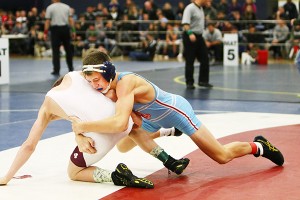 Zach Glazier wrestles at 126 in the Minnesota Christmas Tournament. Glazier went 4-2 at the tournament and placed seventh. – Pam Nelson/For the Albert Lea Tribune

Albert Lea head coach Larry Goodnature said the tournament was good for his team, as it spanned five states and all participants wrestled in the same class. He considered it to be on a different level from the Minnesota state high school tournament.

“This was a good tournament for us,” he said. “I think our wrestler found out if you’re going to win at this level you have to compete. … It keeps getting tougher every round and you’ve got to be ready.”

Albert Lea had a perfect 14-0 record going into the tournament. Goodnature said the competition helped his team learn that in many matches they’ll have to consistently compete for six, sometimes eight minutes to win at the tournament level.

“I was pleased with how we wrestled, but I know some of the kids want to do better,” he said. “I know the kids that did place would’ve liked to place higher, but that’s just the way it went.”

Goodnature also announced that times have changed for the Jan. 30 Owatonna-Albert Lea match at Albert Lea High School. Junior varsity will now start at 4 p.m. and varsity at 5 p.m. Jan. 30 will also be freedom night, where all veterans attending will have free admission and will be recognized during the match. It will also be alumni night, and Goodnature encouraged all Albert Lea wrestling alumni to attend the match and a gathering at Green Lea Golf Course afterward.