With 854 yards on 198 carries, Batton was the leading rusher in the Tribune’s seven-team coverage area. His 16 touchdown runs were seven more than anyone else in the area. Batton anchored a Vikings backfield that produced 2,666 rushing yards this season.

Erickson led a talented front line that paved the way for the Panthers’ backfield to rush for 1,609 yards. Defensively, he was second in the area with 95 tackles. 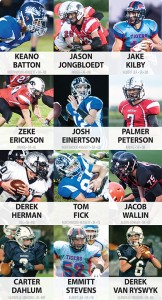 Kilby carried the ball for 770 yards and six touchdowns on 123 carries. His rushing yardage was third in the area. Kilby also completed 22 of 73 passes for 226 yards with two touchdowns and eight interceptions.

Einertson was a dual threat for the Vikings with the best touchdown-to-interception ratio in the area and the sixth-most rushing yards. He consistently made good decisions from the pocket and completed 42 of 91 passes for 844 yards with 13 touchdowns and just four interceptions. Einertson rushed for 639 yards and eight touchdowns on 105 carries.

Jongbloedt led the Panthers and was second in the area with 803 rushing yards. He reached that total on 136 carries and scored seven rushing touchdowns. Jongbloedt was also a threat catching the ball out of the backfield with seven receptions for 146 yards and two touchdowns

Wallin was a force in the trenches with 103 tackles, the most in the area. He also had eight tackles for loss, two fumble recoveries, three forced fumbles and a sack.

As a product of the air-raid offense, Van Ryswyk’s passing statistics flourished, and he was one of three area quarterbacks to have a positive touchdown-to-interception ratio. Van Ryswyk completed 116 of 355 passes for 1,945 yards with 16 touchdowns and 15 interceptions. Wolverines coach Jared Matson said the yardage was the most in the Southeast Conference and is believed to be a school record. Although Van Ryswyk had about twice as many passing attempts as anyone in the area, his yardage reflected that as he threw for 865 yards more than any other area quarterback.

Of the 13 touchdowns Josh Einertson threw, Fick caught an area-high 11 of them. From the tight end position, Fick caught 18 passes for 423 yards for an average of 23.5 yards per reception.

The Wolverines threw more than twice as many passes as any other team in the area except United South Central, and Dahlum was the main target with a team-high eight touchdown catches. He led the area in receptions, 54, and receiving yards, 819. He had 1,248 all-purpose yards and six touchdown catches of 60 or more yards.

Peterson and Van Ryswyk were the only area quarterbacks to break the 1,000-yard passing barrier. Peterson completed 65 of 140 passes for 1,080 yards, which was second in the area, with 12 touchdowns and seven interceptions.

Stevens, a South Central All-District selection, started every game on both sides of the ball for two consecutive seasons, according to Tigers coach Kevin Armbrust. After playing guard, Stevens moved to fullback where he rushed for 252 yards on 74 carries. His 84 tackles were fifth in the area.

Herman led the Rebels and was fifth in the area with 671 rushing yards and five touchdowns on 193 carries. He also was a key blocker in pass protection for a team that threw the ball 184 times this season. Defensively, Herman was seventh in the area with 69 tackles.

Bergo led the Bulldogs’ backfield with 444 yards and three touchdowns on 113 carries. His rushing total was ninth in the area. Bergo also had 57 tackles, which was 11th in the area.

While playing in only six games this season, Van Engelenburg rushed for 724 yards and nine touchdowns on 101 carries. His rushing total was fourth in the area.

Cole was third in the area with 448 receiving yards. He hauled in 26 passes for an average of 17.2 yards per reception with 10 touchdowns. On the defensive side of the ball, Cole had 18.5 tackles.

Johnston was one of two Albert Lea defenders with a season tackle total in the area’s top five. He was fourth in the area with 86 tackles.

Along with the rest of the Panthers’ line, Sletten helped NRHEG amass more than 1,600 rushing yards. Defensively, he was also sixth in the area with 70 tackles.

Olson was a threat from the backfield and as a widout. Along with catching 10 passes for 214 yards and two touchdowns, Olson carried the ball 37 times for 432 yards and eight touchdowns. His rushing average was 11.7 yards per carry.

Linde led the Rebels’ receiving corps. with 22 catches for 293 yards and two touchdowns. His total receiving yardage was fifth in the area. Defensively, Linde also had 10 tackles.

Peterson provided a 1-2 punch along with Jongbloedt in the Panthers’ backfield. He rushed for 479 yards, which was seventh in the area, and four touchdowns on 69 carries.

VanRyswyk was one of four Northwood-Kensett backs to rush for more than 400 yards. He averaged 7.1 yards per carry with 459 yards and nine touchdowns on 65 carries.

Charron excelled defensively with 88 tackles, the third-most in the area. The Southeast All-Conference selection also had two interceptions and forced two fumbles. Offensively, he threw a touchdown pass, caught a touchdown pass and ran in four two-point conversions.

Throne led the Bulldogs on the offensive line at the center position and on the other side of the ball as a defensive end. The Class 1A First Team All-District 3 selection was third on the team with 37.5 tackles. He also had eight tackles for a loss.

Kirkeide was seventh in the area with 241 yards and two touchdowns on 23 receptions. Defensively, he had 12 tackles and two sacks.