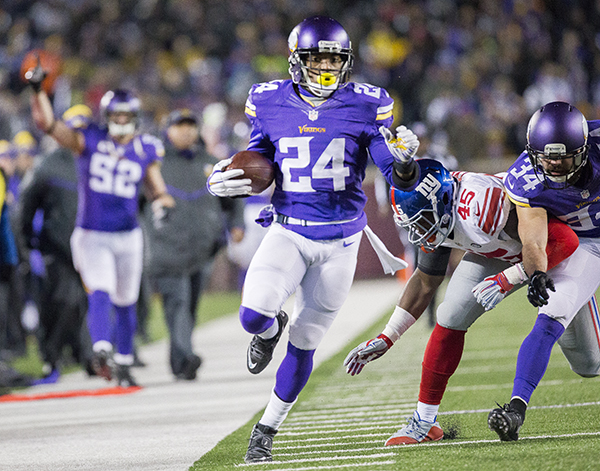 Minnesota’s Captain Munnerlyn carries the ball after intercepting it during Sunday’s victory over the Giants at TCF Bank Stadium in Minneapolis. – Colleen Harrison/Albert Lea Tribune

MINNEAPOLIS — The Minnesota Vikings had all afternoon to watch their competitors play, with the realistic possibility that their spot in the postseason would be secured by the time they took the field.

Turns out, they didn’t need the help. It was a lot more rewarding that way.

Adrian Peterson ran for 104 yards and a touchdown before resting in the fourth quarter, Harrison Smith took one of Eli Manning’s three interceptions into the end zone and the Vikings qualified for the playoffs with a 49-17 victory over the listless New York Giants on a frigid Sunday night.

“It’s a perfect scenario,” said cornerback Captain Munnerlyn, who picked off Manning’s pass midway through the third quarter to set up Peterson’s score that stretched the lead to 29-3. 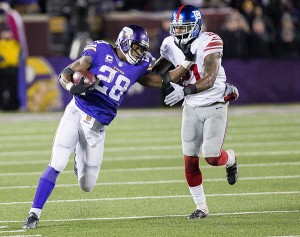 Said coach Mike Zimmer: “If you would’ve told me in July that we’d have a chance the last game of the year to go Jan. 3 and play for a division title, I would’ve been excited about it.”

With Peterson trying to stay warm on the sideline, Jerick McKinnon rushed for two touchdowns in the fourth quarter, including a 68-yard romp through a disinterested defense with the temperature down to 11 degrees.

Manning badly missed suspended wide receiver Odell Beckham Jr. and his 1,396 yards and 13 touchdowns, as the Giants (6-9) trudged toward a fourth straight absence from the postseason. They were eliminated the night before when Washington beat Philadelphia to win the NFC East.

“We wanted the team to play well for each other, for our coaches, and we weren’t able to do that,” Manning said.

Here are some key angles to know about the game:

The Vikings, who eliminated Atlanta from contention by winning, will be the No. 3 seed and host Seattle in the first round if they beat the Packers to win the division for the first time since 2009.

“Once we get in the playoffs, the only team that can beat the Vikings is the Vikings,” Bridgewater said, citing Zimmer’s message to the team this week. 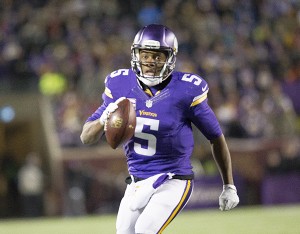 After winning the Super Bowl following the 2011 season, the Giants have gone just 28-35. They are 12-19 in the last two years, and the job that coach Tom Coughlin has held since 2004 has become rather tenuous again.

“We had an opportunity to play for pride and to regain some respect and I thought everybody was on the same page. Tonight is just very difficult for me to explain,” Coughlin said.

McKinnon has three touchdowns in the last two games after going the first 24 games of his career without one. He would’ve had a third score, a 24-yard run on a jet sweep play from the left slot midway through the second quarter, but Matt Kalil was penalized for a false start.

“To see him get in the end zone this year,” Bridgewater said of his roommate for road games, “I was just really excited.”

Manning finished 15 for 29 for 234 yards, boosted by a 50-yard pass to Rashad Jennings that set up an early field goal and a 72-yard touchdown heave to Rueben Randle. Manning, sacked four times, was hindered by a handful of drops by his receivers in these tough-to-catch conditions. He fumbled a shotgun snap, too, and through three quarters had only nine completions to three interceptions.

“I didn’t see it coming. I thought we’d be able to go out there and move the ball and score some points and run our offense,” Manning said.

The Vikings registered their highest score since a 50-10 victory over Jacksonville on Dec. 20, 1998, when Coughlin was coach of the Jaguars.