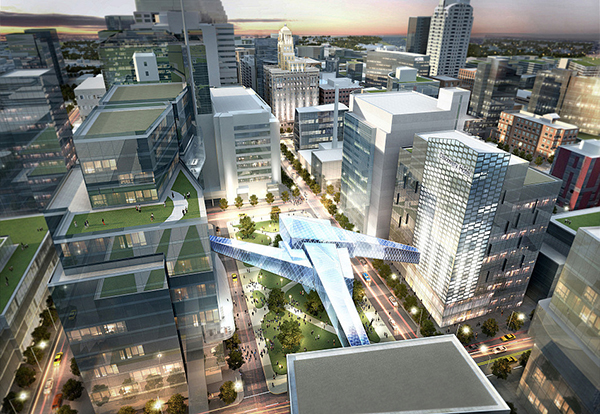 An artist rendering depicts the proposed Discovery Square in downtown Rochester as part of a planned project. – Courtesy of Perkins Eastman

Mayo Clinic officials are in the early stages of a 20-year, multi-billion dollar growth plan — the most ambitious economic development project in Minnesota history. Attracting millennials to Rochester is critical to the success of the that project, the Destination Medical Center.

Getting young professionals excited enough to come and stay, however, may be an uphill climb.

“Eighteen-year-olds are leaving Rochester, many of them, to go to post-secondary education,” said Patrick Seeb, director of economic development and placemaking for the DMC development agency. “We need to do everything we can to attract 22-year-olds back to our community.”

Rochester, he said, is working to make the city an attractive place for millennials to live and work, as cities around the country vie for this demographic to replace retiring baby boomers.

But ask people between the ages of 18 and 34 what they think of Rochester, and it’s not as clear how attractive they see the city.

Will Forsman, a 22-year-old downtown coffee shop manager, offered the most upbeat assessment about Rochester.

“It’s getting there,” he said. “You hear a lot of people complain about it but you’ve got to take it for what it’s worth. There’s a lot to do if you’re looking for it.”

“A lot of my nurse friends who are my age are in the Cities on their weekends off,” she said.

Johnson moved there four years ago to take a job at Mayo Clinic. She’s from Roseau in far northern Minnesota, and said the decision to move to Rochester was easy.

She has a great job at a world-renowned company. But finding things to do in her off hours has been a challenge.

“If you’re not from here,” she said, “and you don’t have family and you don’t have connections, I’ve noticed the nurses end up leaving and transitioning or moving home, or marrying someone and moving to where their spouse is from versus staying here.”

Forsman and Johnson are just the kind of people Rochester is banking on to help support the city’s renaissance. But they said many of their peers are inclined to withdraw from Rochester.

The state’s third largest city is often a stop for people who aspire to live in a bigger, livelier, more robust place, Forsman said. The 75-minute drive to the Twin Cities makes it easy for people to leave town for a big-city fix.

“Looking at Minneapolis, it’s this huge cultural epicenter and everything up there is beautiful, but there’s a lot people and there’s a lot of stuff going on all the time,” he laughed. “And so, Rochester is kind of the toned-down version of that.”

Despite the Twin Cities’ gravitational pull, Rochester’s Destination Medical Center development plan envisions an influx of 32,000 new residents over two decades. The city and DMC officials know millennials will need to make up the bulk of that growth.

Mayo Clinic plans to spend $3.5 billion in capital improvements at its Rochester campus, projects that could attract at least $2.1 billion in additional private investment.

University of Minnesota economic development expert Ryan Allen said it’s not impossible, given Mayo’s stature, but it won’t be simple.

“At least in the short term,” he said, “Rochester has its work cut out for it in terms of creating an urban space that’s going to be attractive to the same extent the Twin Cities are attractive to millennials.”

The DMC’s development plan acknowledges that and calls for more transportation capacity between the two metro areas.

“They’re trying to create something that already exists here and that’s very attractive as a magnet to millennials,” Allen said. “But then again, they also have the cache associated with Mayo Clinic that makes it a really attractive option for people, certainly for labor purposes, but also potentially to live there.”

But making it easier to commute from the Twin Cities also makes it easier to leave Rochester at the close of business — and could make it that much harder for restaurants and other evening amenities to get traction.

There is a line of thought that Rochester and the Twin Cities are partners, not rivals, in the war for talent.

Former Minneapolis Mayor R.T. Rybak, who sits on the DMC board, said Rochester’s proximity to the Twin Cities is one of its biggest assets, not its Achilles heel.

“I think it would be a colossal mistake for Rochester to think it needs to compete for millennials with Minneapolis or St. Paul,” he said.

“The fact of the matter is that Minneapolis-St Paul and Rochester together should be competing for millennials with the Denver region, Boston and New England, Silicon Valley,” he added. “We have a great package and we ought to work together.”

Perhaps, but that’s not what Greater MSP is doing. The Twin Cities economic development partnership recently launched a campaign to woo millennials called “Make. It. MSP.” — not “MSP and Rochester.”

For Forsman and other young people already living in Rochester, it’s hard to know what to expect as Rochester continues to change.