William “Bill” Martin Van Meekeren of Hayward passed away on Sunday, Dec. 13, 2015, at Good Samaritan Society of Albert Lea of respiratory failure. He enjoyed a good, long life of 86 years in Hayward and Hollandale. Bill wanted to be remembered as being a Christian first and foremost, and also for his love of conversing with all of his friends and family. 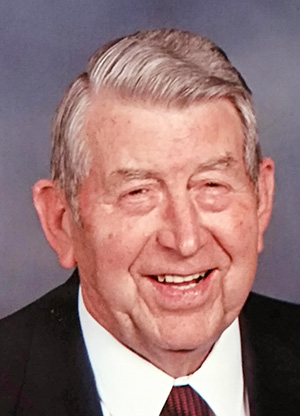 Bill was a faithful son, husband, brother, father, grandfather, great-grandfather, friend and a hard-working farmer and community leader. Bill was born Feb. 5, 1929, at home on a farm in Hollandale, the son of Herman and Stientje (Lewerke) Van Meekeren. He was the oldest of seven children. They had a happy family life and, true to Bill’s humor, he said, “I was a delight.” At the age of 8 the family moved to a farm east of Hayward, where Bill attended Hayward Elementary School. He then continued farming for his father and learned all that he could to take over the farm one day.

On Nov. 28, 1950, he married Grace Koldenhoven in a beautiful double wedding with his sister, Bertha, and Ted Ver Hey. The young Dutch couple began their life together on the family farm raising crops and animals while starting a family of five children — Beverly, Bonita, Robert “Bob”, Barbara and Beth. Bill and Grace ensured that every meal started with prayer and devotions and that the family was together at the table. Everyone pitched in with the multitude of chores. Bill’s love of vanilla ice cream created the weekly tradition of serving the family the sweet treat every Saturday night. At the age of 40 on March 20, 1971, Grace passed away after a several-month battle with hepatitis, an unexpected loss. Bill did a wonderful job filling the shoes of mom and dad for his children living at home. With the help of friends and family they made it through a very difficult time together.

Later Bill married Marilyn Vander Vies. Bill continued to run the family farm and a large chicken egg operation until his retirement in 1992. He then worked for many years for Nick and Jeanne Schermer at the local Hayward grocery store and drove tractor for a local farmer, Marlowe Wangen.

Throughout his life Bill wanted to be active in his community. He served as president of the Hayward Cooperative Board and Booster Club and he volunteered for the Hayward Fire Department. As an active member of Hollandale Christian Reformed Church, Bill served for many years as an usher, a deacon and a member of the building and grounds committee. He was well known for always having pink peppermints to give to the children at the church. Bill was also an active counselor for the Hollandale Cadet Club.

Bill enjoyed woodworking, traveling, golfing, gardening, cooking, canning, bowling, fishing and reading. He knew his way around the kitchen. He preserved jellies, canned or froze fruits and vegetables, and cooked several kinds of soups. For the yearly Christmas family gathering he made several favorite treats from scratch, including popcorn balls, caramel candies, Olie Bollen, beef jerky and pickled everything. He made sure his house was nicely- decorated for the family Christmas party.

He was a man who enjoyed being with people and was known for his sense of humor. Most weekdays you could find him at a local coffee shop participating in conversation with family and friends. His curiosity for life and love for learning was passed on to his family. He will be greatly missed.

Visitation will be from 4:30 to 6:30 p.m. Wednesday at the Bayview/Freeborn Funeral chapel. The Revs. Ron Kruis and Wendell Davelaar will officiate. Funeral services will be at 10:30 a.m. Thursday at Hollandale Christian Reformed Church. The interment will be at Hollandale Cemetery.

Memorial gifts will be donated to Hollandale Christian School. Online condolences are welcome at www.bayviewfuneral.com.