Woman leads programs at Youth For Christ’s The Rock 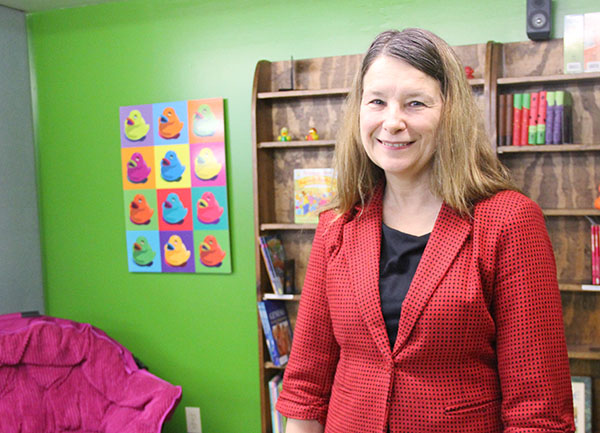 Lillian Armstrong is the grade school director at Youth for Christ’s The Rock in Albert Lea. She oversees Kids Club, which meets once a week at three different locations in town. – Sarah Stultz/Albert Lea Tribune

What started as a volunteer opportunity for one Albert Lea woman has turned into a successful ministry at Youth for Christ’s The Rock.

Lillian Armstrong has worked as the organization’s grade school director since April and oversees a variety of responsibilities.

Armstrong moved to Albert Lea a few years ago with her husband, Jim.

Armstrong, who is a retired product developer with Schwan’s, said her husband works for a Christian publishing company and often travels from Wisconsin to California. The couple liked Albert Lea’s proximity to the Twin Cities and being near the intersection of interstates 90 and 35, so they decided to move here.

Robin Gudal, operations director at The Rock, said Armstrong and her husband first attended a banquet for The Rock and then obtained an application to be volunteers. After volunteering for over a year, Armstrong started on staff in April as the grade school director. Her ministry is focused on children in third through fifth grade.

She said one of her primary duties is to oversee a program called Kids Club, which meets once a week at three different locations in town: Halverson and Sibley elementary schools and at The Rock, on Clark Street.

Another school has asked about having the program there, as well.

The children participating in Kids Club take part in a snack, a game and a message about the Gospel after school once a week. There are about 75 children in total who attend all three clubs, she said.

“Our mission here at The Rock is to make lifelong followers of Jesus, so it’s my responsibility to at least introduce him to the different kids,” Armstrong said. “It has been incredible.”

She organizes two cooking classes a week at The Rock — one with grade school children and a second with high school students. The older children learn basic cooking skills and how to make homemade foods that they enjoy eating.

Armstrong said she also started a reading program with over 200 books of varying difficulties. Most of the books have a Christian theme to them.

Children can earn rewards for reading first for 20 minutes and then after they fill up a punch card.

“We’re extremely blessed,” Gudal said. “We’ve had a strong Kids Club program for many years. I think with Lillian’s giftings and the timing — they have really just taken it to the next level.”

Gudal said Albert Lea’s Youth for Christ chapter is only one of two in the nation with a grade school ministry. Albert Lea’s has been the longest-running one in the country.

Gudal said she and the other leaders at The Rock hope it can be a safe place for area youth. All children are welcome, but there are criteria they must follow when they are there.

Livelihood: grade school director at Youth for Christ’s The Rock

Interesting fact: Armstrong has an identical twin sister who lives in Hopkins.