Worth Brewing Co. to expand into a new facility 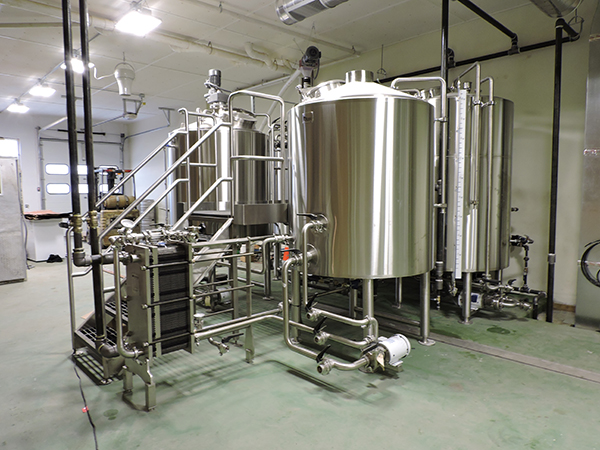 NORTHWOOD — Worth Brewing Co. might be one of the smallest nanobreweries in the Midwest, but it might not hold that title much longer. The company is renovating an old building into its new facility that is right across the street from its current location.

The extra space will allow for many changes for the brewery.

Retail Manager Tyler Trenhaile said the company will move from a half-barrel system, which he called inefficient, to a seven-barrel system.

“It’s a lot more work to get a lot less product,” Trenhaile said of the half-barrel system.

The system will allow the business to expand its distribution market, as well.

“We’ll also be able to start distributing beer, first through kegs and eventually through bottles,” he said, estimating it may take six months to a year to get to that stage.

Expanding doesn’t only apply to the production line. Many changes will be seen at the new facility.

Currently, Worth Brewing Co. has five beers served year-round. These beers are referred to as the company’s flagship beers. The company also has two rotating taps for specialty beers and a guest tap.

Trenhaile said the menu may slightly change with the move.

It may have one less flagship beer, possibly three specialty beers at one time and have an Iowa tap, which will host a beer from a different brewery within the state. Trenhaile also hinted at the idea of producing a cider and an exploration series that would feature unique beers from different parts of the world.

In addition to menu changes, the brewery is taking steps to establish itself as not only a place to be able to enjoy a good beer, but good entertainment. On the lower level of the new building there will be two and half to three times more pub space for customers. On the right of the bar area will be windows into the brewery side. There will also be a kitchen that Trenhaile noted could host guest chefs or food and beer pairing events.

Comedians, bands and other live acts could be on the docket, too.

Just upstairs from the bar, above three other false ceilings and below four different flooring mediums, was the original 1896 ballroom once operated by an independent House of Oddfellows.

The ballroom is being restored and will eventually host a stage and sound equipment for a plug and play place for concerts or private events. Bathrooms, green rooms, a catering kitchen and speak easy lounge area are also planned for the upstairs, which Trenhaile noted may open a month or two after the lower level is completed.

“Worth Brewing, in the new establishment, is going to be about more than just the beer,” Trenhaile concluded.

The current Worth Brewing facility is at 826 Central Ave. in Northwood. The company’s move across the street could come as soon as the beginning of February.