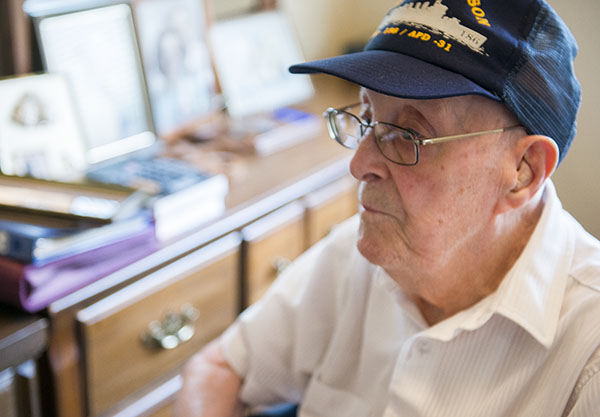 A 94-year-old Albert Lea native can still vividly recall his time served during World War II, so much so that he was interviewed in conjunction with a Library of Congress project.

Russell Pasczkowski served in the United States Navy from July 7, 1942, to Dec. 25, 1945. Following two decades after the conflict of World War I, World War II was the most widespread and deadliest war in history, involving more than 30 countries and resulting in more than 50 million military and civilian deaths — with some estimates as high as 85 million deaths, according to the U.S. National Archives. Sparked by Adolf Hitler’s invasion of Poland in 1939, the war lasted for six years until the final Allies’ defeat of both Nazi Germany and Japan in 1945. 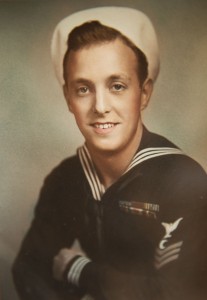 Most of Pasczkowski’s time during the war was spent on the USS Clemson, which he said had a total of 112 men serving on it — 96 petty officers, four chief petty officers, two warrant officers and 10 officers. Pasczkowski said he was a cook during his time on the Clemson, and was a first class petty officer by the end of his time served.

According to Pasczkowski, the Clemson often operated with larger Navy fleets, and used radar and sound gear to report all suicide planes, especially those coming into Okinawa, Japan. Suicide planes were planes piloted with the intent of ramming themselves into the ships and other military resources of the Allies.

While Pasczkowski was on the Clemson, he spent time in multiple countries and areas of the world. In 1942, the ship spent three months in Cartagena, Columbia, fueling U.S. planes that protected shipping in the Panama Canal.

In 1943, the Clemson spent 87 days with the hunter killer group aircraft carrier the USS Bogue. The Clemson and the Bogue, along with three other destroyers and eight patrols, sank eight German submarines off the coast of Africa and Europe. Pasczkowski said the Clemson was given credit for sinking the U-172, which was considered the largest and newest German sub at the time. The contribution earned those on the Clemson a Presidential Unit Citation, he said.

From 1943 to 1945, the Clemson escorted convoys to Argenta, Newfoundland, before transferring to the Pacific. Once in the Pacific, Pasczkowski said the Clemson was reclassified as an APD 31 — a high-speed transport mother ship. The ship picked up a demolition team in Pearl Harbor, made five island invasions and was a picket ship between Okinawa and the mainland of Japan on radar duty.

For his service time, Pasczkowski was awarded a total of 11 Bronze Stars. During World War II, the Clemson was credited with the sinking of one German sub and the downing of four Japanese planes. Pasczkowski said numerous destroyers were damaged during World War II, and a total of 120 destroyers were lost in the war, 35 of which were lost in kamikaze attacks — another term for suicide plane attacks — in Okinawa. Pasczkowski said he read in an American Legion report that 52 Minnesotans died in World War II.

“I’m lucky,” Pasczkowski said. “A lot of boys went in the service and never came home or ended up crippled.”

After getting out of the Navy, Pasczkowski returned home to Albert Lea and married Bernice, his high school girlfriend. The couple had five children, and multiple grandchildren and great-grandchildren. After his service Pasczkowski worked for the Freeborn County Highway Department and for an Albert Lea grain elevator for over 20 years at both, and became a member of the American Legion and the Veterans of Foreign Wars.

Over the years, Pasczkowski said he kept in touch with those he befriended during his time in the service. Now, though, he said his Navy friends have all passed away. He said he was one of three Minnesotans discharged off of the Clemson, and believes he is the only one still living. 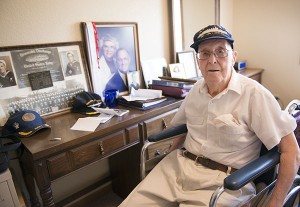 Pasczkowski was interviewed for a veterans historical project in conjunction with the Library of Congress American Folklife Center. – Colleen Harrison/Albert Lea Tribune

“Approximately every three minutes a memory of World War II — its sights and sounds, its terrors and triumphs — disappears,” according to the National World War II Museum website. “Yielding to the inalterable process of aging, the men and women who fought and won the great conflict are now mostly in their 90s. They are dying quickly — at the rate of approximately 430 a day, according to U.S. Veterans Administration figures.”

Pasczkowski was interviewed recently as part of a veterans historical project for the Library of Congress American Folklife Center.

“We’re losing so many men now,” Pasczkowski said. “People need to know what they went through. Some of them went through hell and high water.”