Albert Lea resident puts her own spin on art 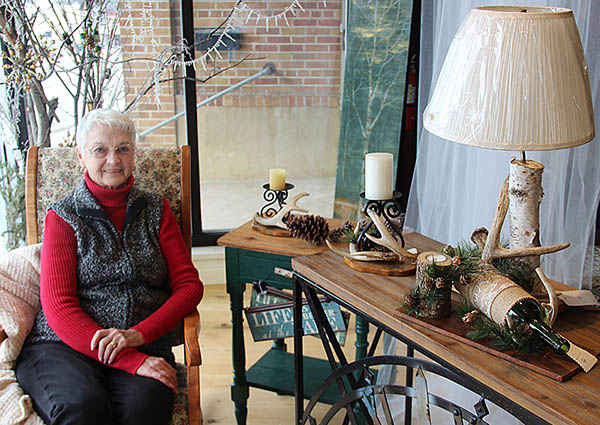 Marlys Webber of Albert Lea started creating real antler art with a box of antlers she and her husband purchased at a garage sale. She has made more than 50 pieces so far. – Sarah Stultz/Albert Lea Tribune

The hobby started with a box of antlers.

Albert Lea resident Marlys Webber said she was at a garage sale with her husband, Richard, when they saw the antlers and she talked him into buying them.

“They interested me,” she said. “Dick didn’t know what in the world I was going to do with them, but he bought them for me.”

Webber said after they bought the box — which she estimated had nine or 10 antlers inside — the box sat on a shelf in the garage for a few years until one day her husband threatened to throw the antlers out if she didn’t do anything with them. So, she started turning the antlers into art — making everything from wine bottle holders to lamps, candle holders, bowl holders and even picture frame holders. 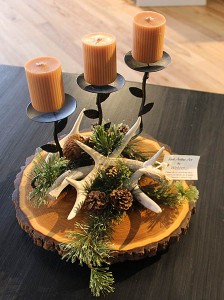 Marlys Webber of Albert Lea has found a passion for creating things out of antlers. This is an example of one of her creations. – Sarah Stultz/Albert Lea Tribune

Webber, 79, now has made more than 50 pieces and has started selling the art at The Color Wheel in Albert Lea and at Cloe’s Attic in Ellendale.

She said to this point all of the antlers have come from white-tailed deer just like the ones found in southern Minnesota. For her projects, she often accompanies the antlers with various types of wood and other decorative materials reminiscent of the outdoors.

Webber said she has always had a creative interest and used to make ceramics with her daughter, and this hobby is just taking that creative inclination in a different direction.

“I enjoy it,” Webber said. “It’s therapy. The end result is gratifying.”

As far as her hobby, Webber said her husband is supportive and often helps her prepare the wood for her projects. She uses black walnut, oak and cedar wood that was given to her by a close friend.

She asked if anyone has any antlers they would like to get rid to call her at 373-8802. She has had a hard time finding antlers.

“I think the hunters always save the bigger ones because those are the trophy ones, and they don’t want to part with them,” Webber said.

Webber was born and raised in Albert Lea, moving away for only seven years of her life when her husband was in the military.

The couple previously owned the Trophy Showcase for 20 years and spent 10 years as captain and first mate on The Pelican Breeze.

Webber said she recently retired as secretary for Oakland and Moscow Lutheran churches after 17 years. Her husband retired from Streater.