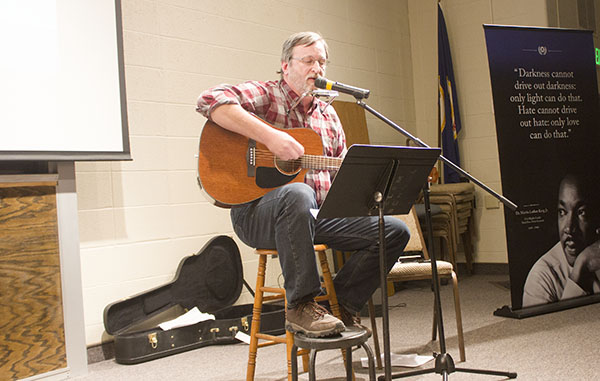 Muschler said if King were still around he would be interested in movements such as Black Lives Matter and making sure people could live in peace and harmony.

“I think we need to be open to listening to people who want to tell us what’s going on,” he said of the Black Lives Matter movement. 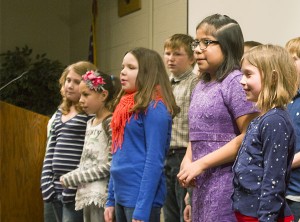 Muschler said the country has come a long way on race relations but still has a long way to go.

He expressed interest in King’s economic views, most notably his views on income inequality, capitalism and the injustices that accompany it.

Muschler cited an Oxfam report that found that the richest 62 people in the world had as much wealth as the bottom 50 percent of the world population.

He performed several folk songs in front of dozens of students, parents, school and city leaders, including “Hard Traveling,” and “Deportees” by Woody Guthrie, Bruce Springsteen’s, “The Ghost of Tom Joad” and Old Crow Medicine Show’s “I Hear Them All,”  while playing the harmonica and the guitar and singing.

Muschler mixed the powerful folk songs with brief messages in between on illegal immigration and racism, intertwining the messages with what he thought King would think.

Muschler, a musician and a fourth-grade teacher at St. Charles Elementary School, said folk music can give a voice to injustice and strife and is a perfect fit to economic and racial struggles.

Cassi Schreiber performed a Finlandia “Song of Peace” as a solo and “Let There be Peace on Earth,” with the audience as the closing song. 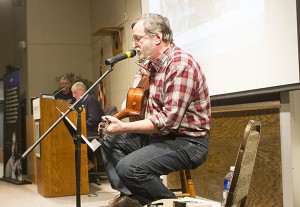 Albert Lea Mayor Vern Rasmussen Jr. said the day is important to the future of the community.

“We need to be embracing that diversity for our future, and so I think it’s important for us to really look at ways that we can embrace that so we can move forward in a positive fashion,” Rasmussen said.