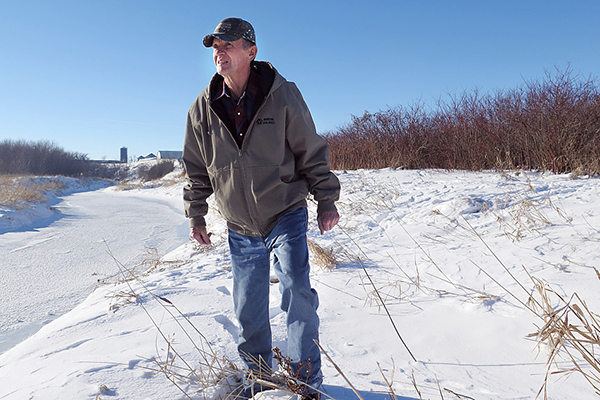 Farmer Walt Kellen, 72, has about 130 of his nearly 1,000 acres in the Conservation Reserve Program. Kellen farms in southwest Minnesota and credits the CRP acres with helping increase wildlife on the property. – Mark Steil/MPR News

Groves of trees and acres of prairie plants break up the nearly continuous fields of corn and soybeans at the Walt Kellen farm in southwest Minnesota. They’re part of the land he has in the Conservation Reserve Program.

Kellen has about 130 of his nearly 1,000 acres in CRP, the longtime federal farmland conversation program. He said most of it’s marginal for growing crops anyway and he likes that the CRP acres have noticeably increased the wildlife on his farm. He’s also planted some 30,000 trees.

Kellen, 72, said he’s happy to accept CRP payments instead of trying to make a go of marginal land. More farmers are likely to be reaching the same conclusion. Major grain prices are so low, many farmers will lose money trying to put a crop in the ground.

Participation had been declining in the CRP, the federal government’s main farmland protection program, which pays farmers to replant crop and pasture land with trees and grasses, providing wildlife habitat and stopping soil erosion.

Those environmental benefits sometimes conflict with the economics of farming, especially when prices are climbing. Farm economics now, though, are turning back in favor of enrolling land in the CRP.

Kellen has allowed grassy buffers to grow along the streams that crisscross his CRP land. They’re the same type of buffer the Minnesota Legislature is requiring all farmers to install along streams, lakes, wetlands and many drainage ditches.

Kellen said the grassy strips filter out pollutants before they reach public waters. The federal government pays him around $80 an acre for his CRP land. The statewide average is about $95 an acre.

The more productive the land, the higher the payment. Minnesota farmers enrolled just over one million acres in the program last year. Val Dolcini oversees the Conservation Reserve Program as head of the U.S. Agriculture Department’s Farm Service Agency.

“CRP really represents one of the most successful federal conservation programs that we at USDA have ever administered,” Dolcini said.

Dolcini said about 23.5 million acres are in CRP across the U.S. Diverting that land from crop and pasture use brings a wide range of benefits, he said.

All of that good comes with a price tag, more than $1.5 billion in annual federal CRP payments across the U.S.

Some years those payments are a good deal for farmers, especially when grain prices fall and it’s hard to eke out a profit from the land. But recent years saw corn and soybean prices soar to record levels.

“Farmers looked at grain prices and said, ‘Hey, I can earn more from the market than I can from the government.’ So they didn’t renew their contracts,” Babcock said.

According to USDA statistics, the number of CRP acres declined by about a third since the peak in 2007. Babcock said policy makers may have to sweeten the pot to reduce pollution from farm field runoff.

“We’re going to have to pay farmers to clean up,” said Babcock.

Dolcini, though, says it should be expected that some farmers will abandon CRP at times and that it’s just one tool farmers use to manage their operations.

“For farmers,” Docini said, “it’s a multi-faceted approach to maintaining the economic vitality of their individual farms.”