Diane C. Gadbois passed away peacefully surrounded by her family on Wednesday, Dec. 30, 2015, at Prairie Senior Cottages in Albert Lea. She was 62. A celebration of life service is being planned for a later date. Bonnerup Funeral Service is assisting the family. 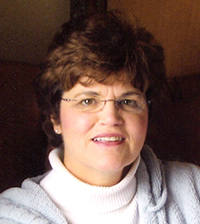 Diane Carol Gadbois was born on Oct. 8, 1953, in St. Paul to Carl and Bernice (Lager) Bunday. She graduated in 1971 from Kellogg High School in St. Paul. She continued her education and graduated in 1973 with her licensed practical license. She used that license to work for the clinic in Albert Lea and later worked for Woodvale.

On April 6, 1974, she was united in marriage to Phil Gadbois in Forest City, Iowa. To this union, three children were born.

Diane went back to college, where she earned her degree as a registered dental hygienist from Mankato State University in 1990. She enjoyed working as a hygienist for 15 years in the community. Diane was a longtime member of First Lutheran Church in Albert Lea. She enjoyed spending time with her family and many friends. She loved traveling with her husband and going on many road trips. She also loved baking, gardening and antiquing.

She is preceded in death by her parents Carl and Bernice.