Florence was born in Austin on Feb. 26, 1922, to David Quincy and Bertha Ruth (Dahlquist) Stephens. She was one of six children in her family. Her mother died when Florence was only 14. Florence graduated from Austin High School in 1940. She met Raymond Carroll on the job, working at George A. Hormel Foods Inc. Florence and Raymond married Jan. 28, 1943. To this union, four daughters were born, Ruth, Pat, Bert and Sue. 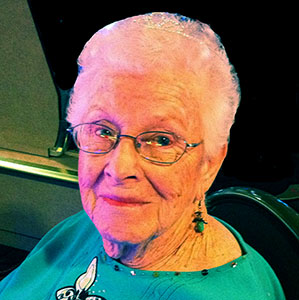 Once Ruth was born, Florence became a homemaker who was very creative. She loved sewing, quilling, cross stitching and fishing. She was an active member of Queen of Angels Church and School and eventually at St. Augustine Catholic Church. Florence was a member of the Austin Eagles Auxiliary No. 703 for 30 years. She was a past-president of Austin and also past-president/director of the fifth district. She was known to have been a classy lady according to her friends and family. Raymond died on Dec. 11, 2002.  She was the last living aunt on both sides of her family. Florence lived in Albert Lea and then White Bear Lake in the later years of her life.

Florence is survived by her four daughters, Ruth Carroll and close friend, Mary Olive, who was also one of the caregivers for Florence, of White Bear Lake, Pat (Pete) Viktora of Austin, Bert (David) Fairbanks of St. Paul and Sue Flatten of Albert Lea; eight grandchildren; 23 great-grandchildren; six great-great-grandchildren; and many nieces and nephews.

A funeral Mass will be celebrated at 10 a.m. Saturday at St. Augustine Catholic Church. The Rev. Jim Steffes will officiate. Visitation will be from 4 to 7 p.m. today at Mayer Funeral Home and again one hour prior to the mass at church. An Eagles ritual service will be at 4:30 p.m. and a wake service will be at 6:45 p.m. today at Mayer Funeral Home. Burial will follow the funeral mass at Calvary Cemetery.

Online condolences may be left at www.mayerfh.com.