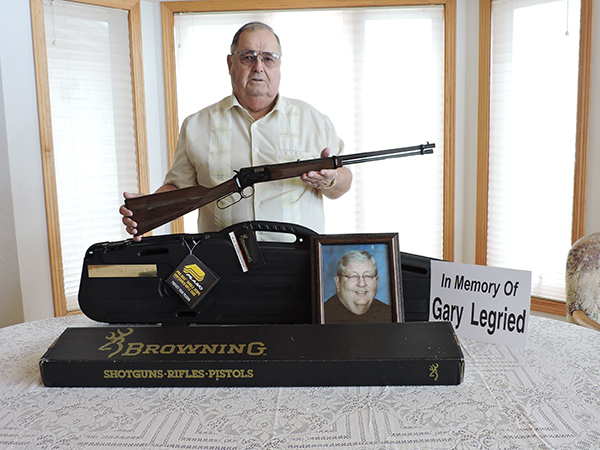 Orville Johnson purchased a Browning 22 rifle that will be auctioned off at the Geneva Cancer Auction in memory of his friend Gary Legried. The rifle, shipping case and hard body case are all being donated in Legried’s honor. – Kelly Wassenberg/Albert Lea Tribune

GENEVA — The second weekend of the Geneva Cancer Auction will take place this Friday and Saturday at the Geneva Bar & Grill.

One of the items on the auction block has a significant meaning for one rural Albert Lea resident.

Orville Johnson lost a good friend and neighbor, Gary Legried, to esophageal and stomach cancer in May. After Legried’s death, Johnson learned that there was a Browning rifle that had been on Legried’s wish list. Since his friend never had the opportunity to purchase the rifle, Johnson did so on his behalf and is donating it to the auction.

“He had a small collection of Browning firearms — very small — maybe four or five at the most in his gun cabinet,” Johnson said.

Johnson explained the Browning 22 he purchased was one Legried had been looking at when attending gun shows for the last three or four years.

“He called it a varmint gun,” Johnson said of the small rifle meant to shoot smaller game, such as rabbits.

Johnson anticipated the rifle, its original shipping case and a hard body case will be sold at the auction sometime Saturday afternoon.

He’s not exactly sure how much money the item will fetch at the auction, but that’s not what’s important to Johnson, who just wants to do what he can to help defeat cancer.

At 83, Whitey Hagen has also lost many loved ones to cancer. He was first asked to participate in the Geneva Cancer Auction after losing a brother to the disease. That was 32 years ago, and Hagen and his wife, LaJune, are still active in the auction.

Hagen said the results of the Geneva Cancer Auction won’t be released until after this weekend; however, the collective events the organization hosts raised over $100,000 for the Eagles Cancer Telethon last year.

Hagen credits the people of Geneva and its surrounding communities for continuing to support the auction so generously.

This year’s auction includes Johnson’s rifle, handmade fishing rods, gift certificates and a variety of other prizes that come in every day throughout the auction. There is also a raffle that includes prizes, such as cash and a flat-screen television.