Geneva native honored as Sailor of the Week 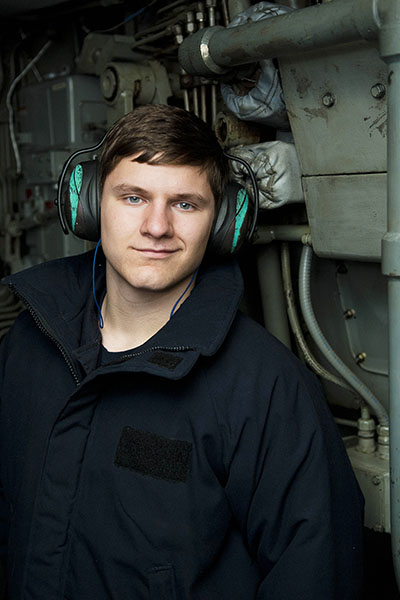 Fireman Daniel Gould from Geneva is serving aboard USS Green Bay which is located in Sasebo, Japan. – Provided

Fireman Daniel Gould of Geneva, who is serving aboard USS Green Bay, earned Selective Restricted Availability Sailor of the Week for the week of Dec. 14 through Dec. 20.

The Sailor of the Week Program recognizes superior performance of enlisted personnel emphasizing exemplary personal conduct and military bearing, and demonstrated initiative in the performance of duty.

“It means all of my hard work and dedication to obtain qualifications as well as the maintenance I conduct, has been noticed,” said Gould.

Gould, a graduate of Albert Lea High School, enlisted in the Navy after high school and has been in the Navy approximately one year.

“I feel like I’ve been able to overcome unique challenges, both professionally and personally,” said Gould. “Since joining the Navy, I’ve developed a need for creativity in devising effective solutions.”

Gould’s commanding officer said she’s proud of the hard work and dedication that Gould has exemplified within the command.

“Fireman Gould is an extremely hard working sailor, who hit the deck running, getting qualified as quickly as he could in his watch stations,” said Gould’s commanding officer, Capt. Kristy McCallum. “He is an integral part of Engineering Department, making sure maintenance and repairs down in the main spaces goes smoothly while the ship is in SRA. Furthermore, he was a first responder to an electrical fire in the Pilot House. His keen eye, devotion to duty and damage control training helped to ultimately thwart a potential disaster.”

Located in Sasebo, Japan, USS Green Bay is a San Antonio-class amphibious transport dock, assigned to the U.S. Pacific Fleet. She is the second ship of the United States Navy to be named for the city and bay of Green Bay, Wisconsin. This ship is designed to deliver a fully equipped battalion of 800 Marines. The ship’s name has resulted in a close connection to the people of Green Bay, Wisconsin, and their professional football team, the Green Bay Packers. The ship’s flight deck is named “Lambeau Field” after the name of the Packers’ stadium. Green Bay businesses and residents even presented the ship with a truckload of Packerland memorabilia for its 2009 commissioning.

“The primary mission of Green Bay is to transport Marines afloat and ashore to perform a wide range of missions, including humanitarian assistance operations, all supporting maritime strategy,” said McCallum. “Green Bay also helps to provide deterrence, promote peace and security, and preserves freedom of the sea within 7th Fleet’s area of operations.”

His mother and father, Don and Cindy Gould, reside in Geneva, while the Navy has given Gould an opportunity of a lifetime.

“I initially joined the Navy for personal growth and the opportunities to travel but the Navy is so much more than that; it’s about my shipmates,” said Gould.  “I like the people that I work with, both in my own department and in others.”