Memorial services for Gloria Bernadine Peterson of Emmons will be at 1:30 p.m. Wednesday at Emmons Lutheran Church. The Rev. Christopher Martin will officiate. Visitation will be from 4 to 7 p.m. Tuesday at Bonnerup Funeral Service in Albert Lea, and one hour prior to the service at the church. Interment will be in Lime Creek Lutheran Cemetery at a later date. 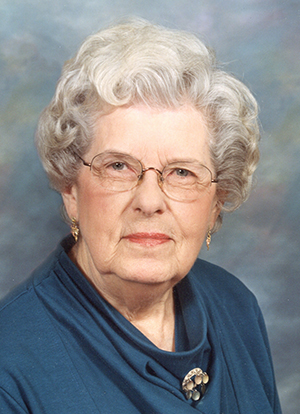 Gloria was born May 27, 1924, the daughter of Henry and Gertrude (London) Opdahl in Albert Lea. She grew up on the Ole Opdahl homestead in Mansfield Township. She attended school in District 74 Mansfield Township for eight years and graduated from Alden High School in 1942. She graduated from Waldorf College and toured with the choir in 1944. There were two boys left to graduate, as all the others had gone to war. Gloria aspired to become a nurse at Fairview Hospital, but because of a back injury the path took a detour. She went for one quarter to Gustavus in St. Peter and the following two years to Augustana in Sioux Falls, South Dakota.

Gloria worked at the Sioux Falls Public Library part time, then full time following graduation. In 1948 she taught seventh and eighth grades in Bancroft, South Dakota. In 1949 she came back to Emmons to teach those same grades. In 1966 she went to work as a social worker in Freeborn County and retired in 1986 after 20 years.

Gloria was united in marriage to Russell Peterson on Aug. 20, 1950, at Lime Creek Lutheran Church in Emmons. She was an active member of the Emmons Lutheran Church serving on church council and church circle. Gloria was involved on the St John’s Lutheran Community board and volunteered for hospice and the Freeborn County Historical Society. She loved music and singing and sang for many weddings and funerals.

She was preceded in death by her parents; husband, Russell; brothers Duane and Harlan Opdahl; and an infant sister.