‘God saved him for a purpose’ 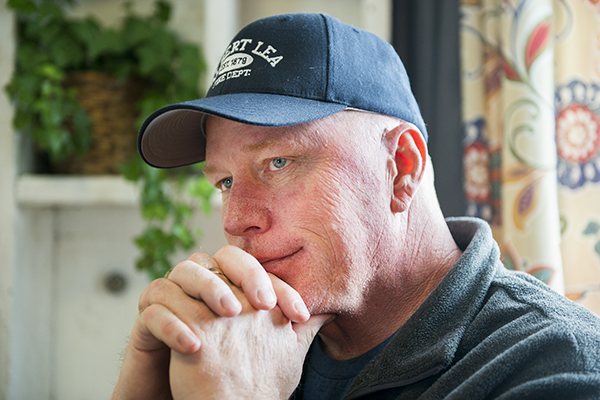 Alden resident Doug Johnson recalls fond memories with the city of Albert Lea’s inspection department and the Albert Lea Fire Department. He has been off work for several months as he has dealt with a massive stroke and brain cancer. — Colleen Harrison/Albert Lea Tribune

Despite being diagnosed this fall with a high-grade form of brain cancer, Johnson has made it his point to be positive. 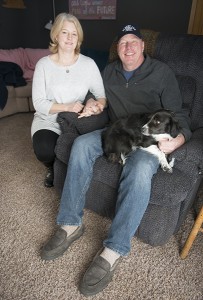 Doug Johnson sits with his wife, Evon, and one of their dogs, Angel. — Colleen Harrison/Albert Lea Tribune

It is that positive outlook and his increased faith that is moving him ahead while at the same time impacting others for good.

“It’s very clear God saved him for a purpose,” said his wife, Evon. “He’s overflowing with love, and he knows that God still has a work for him to do.”

Though he still faces some challenges with talking — he often knows what he wants to say but struggles coming up with the words to express himself — he has made big gains.

She said her husband, who likes to give out hugs, has been surprising people with his progress.

‘He wasn’t right after that’

The complications started June 20 on what was Doug Johnson’s 50th birthday.

His wife said he was running the Morin Lake Days softball tournament when he passed out and had a seizure at a park in Alden.

An ambulance took him to Mayo Clinic Health System in Albert Lea, but he was ultimately sent home with what doctors described as possible dehydration.

“He wasn’t right after that,” she said. “He didn’t recover quickly, and he was weak.”

On July 11, he was set to play in the Tee it up for Courage Golf Tournament at Oakview Golf Course. Just as he was going to hit his first ball, he got light-headed and ultimately had an 11-minute seizure, his wife said.

He was taken to the hospital and had a second seizure just as he was set to be released to go home. He was then transported to a hospital in Rochester.

Evon Johnson said her husband spent close to a week in the hospital, as doctors conducted all sorts of tests, including an ultrasound looking for clots. Doctors ultimately put him on anti-seizure medication when he went home.

In September one day, she said her husband had gone to the fitness center in Alden in the morning. When he came back, she said she knew something wasn’t right with him, and she called 911.

That day, Doug Johnson had suffered from a massive stroke and doctors performed emergency surgery. She said he had a 10 percent chance of survival and was paralyzed on his right side.

“We almost lost him that day,” she said.

Evon Johnson said doctors told them he may not be able to walk or talk again, but within a couple days he began moving his right leg and his arm and some words started to return.

“At that time they gave him three months to 1 1/2 years to live,” she said. “They’ve had some who have lived up to four.”

Doug Johnson said doctors have told him he is making good progress.

“If it comes to the point that this finally kills me, then that’s what it is, but that’s not what people are telling me,” he said.

His wife said he is surprising people with his progress.

A lifetime of service

Doug Johnson is known across Freeborn County for his service in many different sectors.

He most recently worked as the building official for the city of Albert Lea and worked as a building inspector for more than 20 years. Before that he worked in Rochester.

Jenny Nelson, a co-worker in the Albert Lea Inspection Department, said Doug Johnson is known for his patience with people at work.

“He always gives people the benefit of the doubt,” she said. “He always treated everybody the same, no matter who came to the counter — and always with the same respect.”

She described him as a team player who was willing to try new things.

He has an interest in historical preservation and worked with the city’s Historic Preservation Committee and was excited to see renovations taking place downtown.

In addition to his inspection duties, he served as a fire investigator for the city and as a volunteer firefighter for the Alden Fire Department since the 1990s. He has investigated numerous fires over the years, some of which he even had to testify about in court, he said.

“I love all these guys,” Doug Johnson said as he looked through a binder with pictures and names of all the people he worked with at the city. “I miss them so much.”

In addition to his work and time with both fire departments, he also has been involved in many activities in the community.

In Alden, he was on the school board for eight years, including two years as president.

Nelson said he also coached the girls’ golf team in Alden and was on the church council at his church.

Coming from a family of athletes, he was inducted into the Minnesota United States Specialty Sports Association hall of fame for slow-pitch softball in 2011.

He and his wife have four children.

A benefit is slated from 3 to 8 p.m. Saturday for Doug Johnson and his family at the Fairlane Building at the Freeborn County Fairgrounds.

The benefit will include a pork sandwich meal for $8, a bake sale, a raffle and a silent auction. T-shirts will be available for $20.

Evon Johnson said she and her husband have been overwhelmed with the support they have received in the last few months, and they look forward to visiting with people at least for a little while at the benefit. Doug Johnson has had to limit his interaction with people but is slowly able to add in more.

“Everything is going way, way better than everyone anticipated,” she said.

The couple said with all of the help they have received, they hope to find ways to give back to others.

“All this good, somehow, we hope we can give back and more,” Evon Johnson said. “Every day, he’s thinking of ways to give back.”