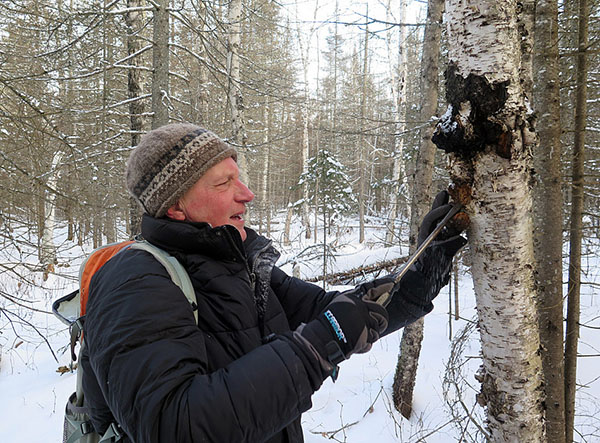 Brian Garhofer chisels off a chunk of chaga growing on a birch tree near the Knife River on Jan. 16. – Dan Kraker/MPR News

It’s 5 below zero here along the Knife River, not exactly the sort of morning that screams, “Tromp through the woods in search of obscure fungus.”

Brian and Donna Garhofer, however, say this frigid, recent winter day could not be more perfect for their hunt.

With the leaves down, it’s easier to scan the woods for dark spots on birch trees. It doesn’t take long until they find their treasure — a frozen chunk a few inches across, growing from a spot in the birch tree where the bark splits. It looks more like a tumor than a mushroom.

It’s chaga, a black and crusty fungus that’s become an international alternative health sensation. Believers claim it helps treat everything from joint pain to Lyme disease. With it fetching as much as $20 a pound, more people are roaming northern Minnesota’s forests searching for it. It’s a cottage business gone global, but one that increasingly worries state conservation officials.

“What you see is this charred exterior, almost like a burnt looking thing,” Brian Garhofer said as chisels off a piece, careful not to dig into the tree. “The inside is kind of a yellow, golden.”

The Garhofers have been harvesting chaga for about three years. They brew tea with it. And they both saidit’s improved their health.

“For me, it keeps me regular,” Donna Garhofer said. “I think I feel better, overall better.” Brian said it’s improved his cholesterol levels and prostate health.

Science backs up at least some of the claims people make about chaga. Birch trees produce several promising compounds, including something called betulin that Brian Garhofer said has been shown to reduce cholesterol and blood pressure and stimulate the immune system.

The couple has built careers out of birch trees, which Donna Garhofer said have been revered for centuries by many cultures, from Native Americans to Russians. Donna Garhofermakes soaps and other personal care products using chaga and birch bark for her company Birch and Body.

Brian Garhofer is CEO of a company called The Actives Factory, which extracts naturally occurring chemicals in birch bark to use in pharmaceuticals, nutritional supplements and other products.

The Garhofers harvest chaga mainly for their personal use. For others it has become a business.

Shane Dugan jokes that he heads up the “chaga department” for Icecube Enterprises, a firm working out of a Main Street storefront in tiny Remer, about two hours west of Duluth. “Population 350, with house pets,” he said.

In the front, there’s a store selling antiques and coins. In a back storeroom, there are boxes and boxes of chaga.

“We’re not sitting on a whole lot right now, maybe 450 pounds, enough for about three months of sales,” said Dugan, who also delivers mail for the post office in Remer.

About four years ago he noticed a steady stream of 50-pound boxes getting shipped out. He asked the postmaster, Ted Frick, what was in them.

“He said, ‘It’s chaga.’ I said, ‘What’s that?’” Dugan said recalling the conversation. Frick didn’t know and told Dugan to look it up.

He lopped off a chunk from a tree and brewed it up.

“It just warmed you from the top of your head to the tip of your toes,” he said. “I said, ‘This is interesting stuff.’”

Frick and Dugan soon launched a business, recruiting a handful of foragers to harvest chaga in the woods.

Now they’re shipping chaga globally. They sell out of their storefront to natural foods stores and through eBay. The business has grown by about 25 percent per year, Dugan said.

In the process he’s become a chaga evangelist.

Some people in town, he acknowledged, think he’s more quack than guru.

But Dugan said the vast majority of those who try it become repeat customers; they are “just regular Plain Jane normal people looking for an alternative to things that aren’t working for them.”

Icecube Enterprises is careful to disclose their products are not intended to diagnose, treat or cure disease.

The U.S. Food and Drug Administration has warned other chaga distributors for claiming their products can treat diseases like cancer and HIV.

“There’s a lot of people selling this. There’s companies selling extracts and capsules, making all kinds of claims. They’re selling it like snake oil,” said Ron Spinosa, past president of the Minnesota Mycological Society and a regular chaga tea drinker who says he’s only gotten a couple colds in the 10 years since he started.

For the past decade, he’s led chaga expeditions with other mushroom collectors. Demand for the fungus, he said, is making it increasingly harder to find.

“There’s some concern about sustainability, and I think that’s legitimate,” he said.

The Minnesota Department of Natural Resources is also concerned some people are harvesting chaga illegally in state parks.

Chaga is not technically a mushroom and therefore can’t be harvested in state parks, said Ed Quinn, natural resource program consultant with the DNR Parks and Trails office. Harvesters can take it from other state lands, but need to buy a permit.

Chaga does regrow if it’s harvested correctly. But it can take 10 to 15 years.

Dugan said his harvesters are telling him it’s harder to find. “I keep asking these guys, ‘How much time do you think we’ve got?’ They go, ‘Five to seven years, maybe.’”

Worst case scenario if people stop buying chaga? No problem, he said, “If no one else wants it, I’m good for life.”