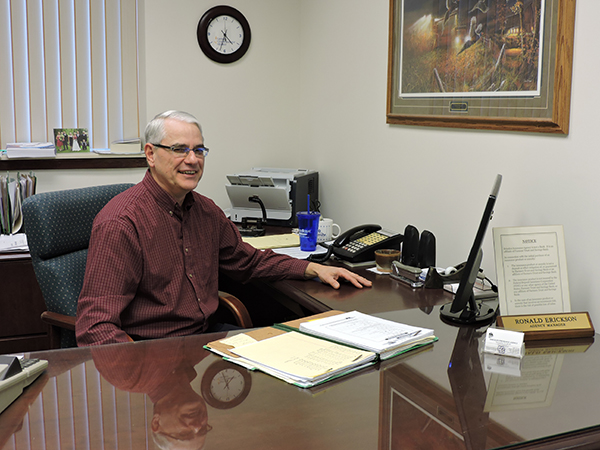 “Luckily, in 2015 we had very few claims,” he said. “It was probably the least amount of claims we’ve had in a long time.”

In his business, Erickson wishes nothing but good fortune for his customers. However, he is there to make sure their insurance needs are adequately covered if that’s not what fate has in store for them.

He usually starts with an interview and checklist encouraging his customers to have properly installed fire alarms, carbon monoxide detectors and fire extinguishers on hand. He also thinks it’s important for customers and non-customers alike to review their insurance policies at renewals.

“A lot of times when customers get their renewal paperwork — every six months for auto and one year for home — that’s a good time to look over their coverage.”

He frequently sees customers coming in at that time to look for different policies when rates go up. He will review their policy to see if their coverage is reasonable and the price for the coverage is acceptable and has several different options for those wishing to shop around for insurance.

“We’re an independent insurance agency so we’re not locked into one company. We’ve got 10 different companies we can got to with your insurance needs.”

According to Erickson, this allows him to help fulfill his customers needs at a pretty competitive price.

While they sell everything from auto, home, life, health and crop insurance, the most frequent customers Erickson deals with are farmers. It’s a demographic Erickson can relate to quite well. Erickson was born and raised in Bricelyn, graduating from high school when the town still had its own high school. After attending college at Concordia College in Moorhead, he returned home to help his father farm and worked on doing people’s taxes during the winter months. During the farm crisis in the 1980s, he had to find a different job and Farmers Trust and Savings Bank just so happened to be hiring.

He spent 25 years as a loan officer at the bank before crossing the aisle into insurance seven to eight years ago. His experience at the bank helped him become familiar with his customers’ situations, which aids him in determining their insurance needs.

He still lives on a farm with his wife, Janice, outside Bricelyn and still farms corn and soybeans.