Kiester woman prepares for show in Fairmont with creations 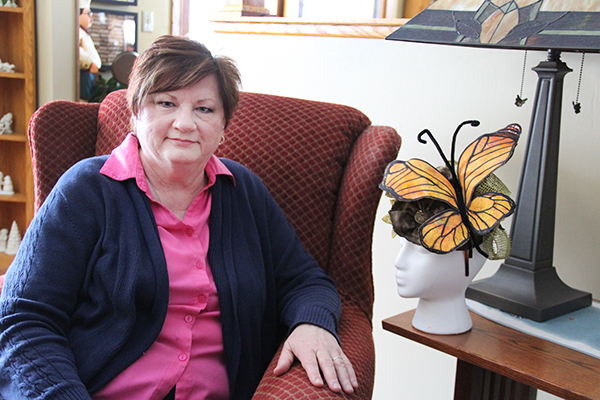 KIESTER — A retired educator from the United South Central School District is using her creativity to branch out into the art world.

Wendy Nickel of Kiester has had her work shown as a member at the Albert Lea Art Center and at the Textile Center in Minneapolis. She is now gearing up for a new show at the Red Rock Center for the Arts in Fairmont.

Called “Embellishment: The Art of Buttons and Twigs,” the show begins Thursday and runs through Feb. 26. A reception with the artist will be from 1:30 to 3 p.m. Feb. 13. The event is open to the public, and refreshments will be served.

The show will include a collection of quilts, wall hangings, weavings, wearable art, accessories and dolls. There are 39 pieces in total.

Nickel said the name of the show came from her love of buttons.

“I grew up with a mother who had a button container,” she said. “I’ve always liked to use a lot of them.”

Last year, she had a tree trimmed and there were twigs everywhere, she said. Since then, she has also begun to incorporate twigs into her creations.

Originally from Delavan, Nickel has lived in Kiester for 30 years.

She retired from USC in 2013 after teaching what was initially called home economics and what is now referred to as family and consumer science. Her teaching career began in Bricelyn, Frost and Kiester and she finished at USC in Wells.

Nickel said since she retired, she has been involved in numerous activities including volunteering at a thrift store in Wells, at the Kiester theater and at her church. She has done some 4-H judging and is president of the Faribault County Master Gardeners.

Though she does not classify herself as an artist, she said she does like to create things.

She is especially interested in creating fascinators, or headpieces.

“I’ve always enjoyed looking at hats and what the royal people people wear in England,” she said.

When she was still teaching, she said there were a few years she taught fashion design and started creating them then.

“It’s a creative outlet,” she said of her work.

She has looked into expanding her skills and is applying for a grant for some new projects.

She said she is grateful for her mother and her students for the examples they set in her pursuit of making art.

The Red Rock Center for the Arts is at 222 E. Blue Earth Ave. in Fairmont.

A headpiece Nickel created is also being shown at the Textile Center in Minneapolis through Feb. 27. This piece is titled False Indigo.

Nickel said she has been making art since she was a child and became interested in textile projects through the 4-H program.