Stabbing took place in an argument over a beer

Sentencing is scheduled for April 7. 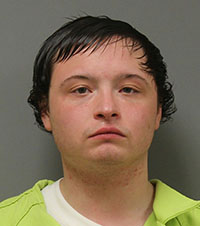 According to court documents, Albert Lea police responded to an apartment July 1 on Front Street on a report of a stabbing.

Upon arrival, the victim reportedly told an officer that Bakke stabbed him.

The two reportedly lived together and were arguing over sharing a beer.

The victim was transported to the emergency room for treatment.

According to court documents, a witness, a cousin of the brothers, said Bakke and the victim had been drinking and smoking marijuana and the victim was bugging Bakke all night. The witness said Bakke went into the kitchen, got a sharp butter knife, went up to the victim and stabbed him once in the leg. Bakke reportedly then told him not to tell anyone.

According to court documents, Bakke has a prior conviction of misdemeanor domestic assault and two counts of fourth-degree assault.

Bakke was originally charged with second-degree assault with a dangerous weapon, but that charge was dismissed with the plea deal.

He faces a maximum sentence of five years in prison and a $10,000 fine.