Meyer to retire after 39 years at Paragon Bank 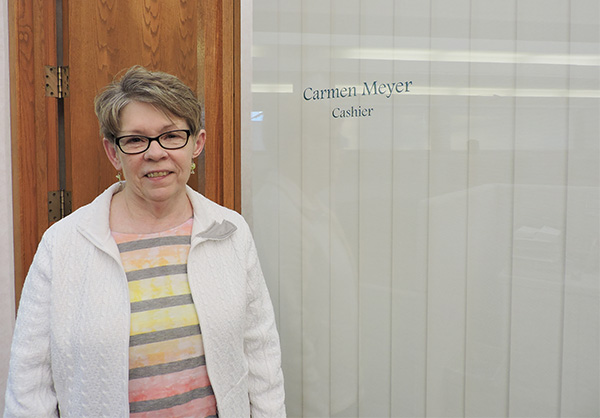 Carmen Meyer will retire from her position as a cashier at Paragon Bank on Friday. – Kelly Wassenberg/Albert Lea Tribune

WELLS — Paragon Bank will host a retirement party for Carmen Meyer from 11 a.m. to 5 p.m. Friday. The party will mark Meyer’s last day at the bank and is only days away from what would have been her 39 year anniversary at the bank.

Meyer’s history in banking spans over 40 years though. The Vernon Center native started her career shortly after graduating from Amboy High School. Her first job was as a teller at Security National Bank in Amboy. She also did accounting work for the bank’s insurance agency. That position lasted about two years before Meyer moved to Wells and started a family.

When her daughters Tracy and Sara were young she primarily stayed at home, only doing part-time work until returning to banking in February 1977. Back then Paragon Bank was known as Security State Bank and had a different location on Broadway.

She received a promotion from teller to cashier in 1982 and her duties broadened.

“It kind of grew over the years which is part of the benefit of a small bank. You get to wear a lot of hats,” she said of her position.

Meyer has dabbled in consumer lending, payroll, accounting and had done many of the bank’s required tasks including quarterly and annual reports.

While she will be retiring in order to travel more with her husband, Dave, and get to a long to-do-list which never seems to get done, Meyer said she will still remain on the bank’s board of directors and will come back to the bank to help train others.

“We do a lot of cross training and we have to,” Meyer said noting that it’s not only a regulation requirement to ensure the bank can continue to fulfill its daily obligations even when someone is out, but it’s a strong business practice.

“I’ve really enjoyed seeing the evolution of banking from the very mechanical machines we used to work with to obviously the very computerized things we do with the internet,” Meyer said.

She’s also enjoyed the customers she’s met and the professional contacts she’s made at corresponding banks and area conferences.

“I enjoy the people and interacting with them, the conversations.”

In the end Meyer said, “I hope I’ve left them all with a feeling that they were important to us.”

Paragon Bank President Jim Heckman has no doubts of that.

“She has been committed to Paragon Bank and its customers everyday she has been here,” he said.

“She has handled all of her regular duties and hundreds of special assignments that came with certain time commitments that made them more difficult,” Heckman continued. “All of them were handled very well.”