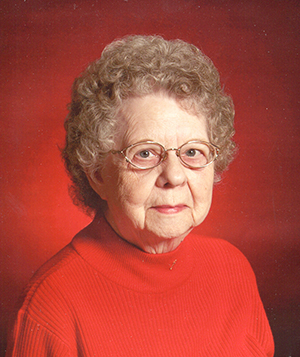 Mildred Marie (Holan) was born on Oct. 16, 1923, to Joseph and Mina (Hendrickson) Holan in Wells. She grew up in Wells and attended school through the ninth grade. In March of 1945, she was united in marriage to Bernard Sondergard, and two children were born, Michael and Jerry. The couple later divorced. In May 1956 she was united in marriage to Duane M. Anderson.  To this union, three children were born, Rodney, Laura and Joseph.

Mildred worked mainly as a waitress. She worked at Chef Cafe, B&B Cafe and Elbow Room.  She was a faithful member of St. Theodore Catholic Church. In her free time, she enjoyed to write poetry, tell stories of her youth, listen to music, sing and play bingo. She would also try her luck at a few scratch-off tickets from time to time. Mildred could be described as a loving, happy and genuine person. She loved to spend time with people and enjoyed conversation, but most importantly — she loved and cared for her children, grandchildren and great-grandchildren.

She is preceded in death by her first husband, Bernard Sondergard; second husband, Duane Anderson; both parents; and siblings George Holan and Mary (Gerald) Schultz.