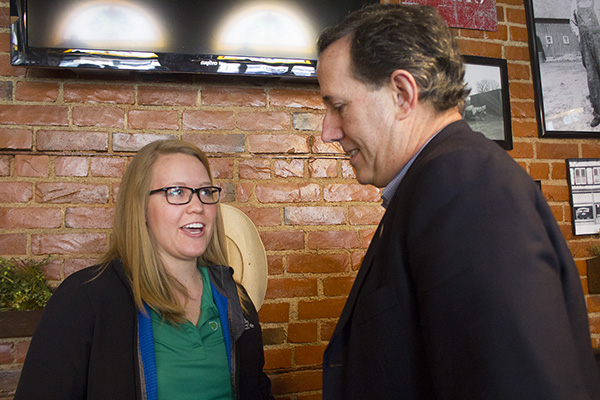 LAKE MILLS — A candidate for the Republican nomination for president urged Iowa voters  Wednesday morning to vote for him in Monday’s caucus.

Rick Santorum, a former Pennsylvania senator, framed himself as a strong, consistent conservative who has brought people together and won tough elections. He claimed his experience makes him an appealing choice for voters, and advised attendees to trust their own judgment. 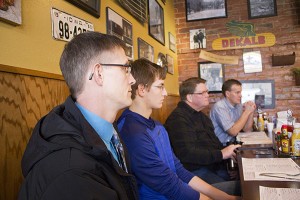 “I would hate to see what would happen to Iowa if that were to happen,” Santorum said.

He claimed ethanol is a critical part of the Iowa economy, and cited his voting for the Renewable Fuel Standard in 2005 as proof of his support.

He described his time as a two-term senator in Pennsylvania and his defeating of Democrats against the odds. Santorum also cited welfare reform, health savings accounts, pro-life votes and work toward fighting AIDS in Africa as proof that he can get things done.

He claimed his work on writing sanctions on Iran and Syria were bipartisan and proof of his experience and knowledge of the political system, and said his qualifications are necessary for the president of the United States.

“You’re going to have to have a leader who can pull people together and get a consensus on how to deal with Iran,” he said.

“Obamacare is a disaster,” he said.

He touched on the issues Veterans Affairs facilities have faced over the years, and expressed support for reducing system costs and getting rid of what he called a bureaucratic mess. He proposed VA facilities focus more on dealing with mental health, post-traumatic stress disorder and addiction issues amongst veterans. 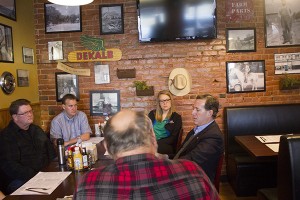 Rick Santorum discusses his views to about a dozen people at Teluwut in Lake Mills. – Sam Wilmes/Albert Lea Tribune

He claimed cuts are needed in the Medicaid budget, and expressed support for sending the program to the states. He also proposed requiring all able-bodied users of the program to work.

Santorum urged Iowa voters to use common sense to vote for him, and said he’s a fighter. He listed his experience and ability to get things done as positives, and pledged to work together with Democrats on key issues. He claimed that hard-line candidates within the Republican party would make it hard to work together.

He framed himself as being able to take on the consensus establishment, and said he nearly defeated eventual nominee Mitt Romney in his home state of Michigan.

Santorum peppered his speech with references to Obama and what Santorum deemed his picking and choosing of laws.

“Everything the president’s done can be reversed,” Santorum said.

Santorum specifically mentioned removing environmental regulations that he deemed as not having discernible health benefits and executive orders that can be reversed with a conservative president.

Obama has hurt the conservative movement through his regulations and administrative interpretations, he said, and claimed that is what has allowed Obama to take regulations and laws and interpret them in a different way for implementation.

Santorum said the U.S. is a world environmental leader, and claimed to reduce pollution the country needs to lower taxes and regulations to take jobs back from China.

If elected, Santorum pledged to make the U.S. the No. 1 manufacturing country in the world, and framed himself as a good candidate for the economy.

“When I heard he was coming to north Iowa again, I wanted to make sure and get behind him and support him when he hits these small towns,” he said.

Lake Mills resident Jim Boehmer said he likes Santorum’s plan to bring people together, and said that’s the mark of a leader. He said he also appreciated Santorum’s civility and logic.

Boehmer said he is considering voting for Santorum, but is wary of his social views, specifically on government involvement in personal lives.

According to Real Clear Politics, Santorum is in last place in the Iowa Republican Presidential Caucus with 1 percent. Santorum finished second in the 2012 Iowa Caucuses.

Despite the poll results, Santorum said he was pleased with how the event went, and said he got a few commitments.

“I believe that the best way to win an Iowa caucus is to talk to Iowans,” Santorum said.

Santorum took a parting shot at Trump’s decision not to take part in today’s Fox News debate following the meeting.