Funeral services for Richard Bjelland, 86, will be at 11 a.m. Thursday at Our Savior’s Lutheran Church in Albert Lea. The Rev. James Kassera will officiate. Interment will be in Lakewood Cemetery. Military honors will be accorded by the American Legion and Veterans of Foreign Wars honor guards. Friends may greet the family one hour prior to the service at the church. Bayview/Freeborn Funeral Home is assisting the family. Online condolences are welcome at www.bayviewfuneral.com. 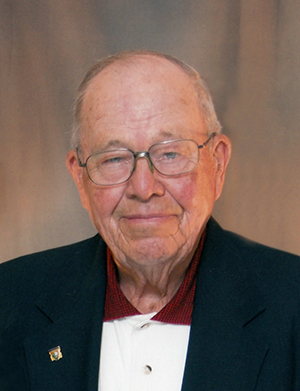 Richard Alan Bjelland was born July 14, 1929, in Lake Mills, the son of Ernest and Bernice (Nessa) Bjelland. He grew up on the family farm near Lake Mills where he attended and graduated high school. He attended Waldorf College in Forest City, Iowa. He honorably served in the U.S. Army during the Korean War. On Sept. 21, 1951, Richard was united in marriage to Leona Stalheim in Albert Lea. He was a heating and air conditioning contractor, owning his own business, North Side Sheet Metal Shop. Richard was a member of Our Savior’s Lutheran Church in addition to Sons of Norway and the American Legion. He enjoyed being with family and friends, reading the newspaper, working crossword puzzles, playing cribbage and watching football and sports on television. He also enjoyed family gatherings and outings and spending the winter months in Arizona.

Richard was preceded in death by his parents; brother and sister-in-law Robert and Elaine Bjelland; and grandson, Nicholas Bernau.

In lieu of flowers, Richard’s family asks that people consider a memorial to Bethany Lutheran Seminary in Mankato or the Evangelical Lutheran Synod mission program.