Rudolph Nelson of Scarville, Iowa, passed away Sunday, Jan. 3, 2016, at St. Marys Hospital in Rochester. He was three days from his 92nd birthday.

Funeral services will be at 1:30 p.m. Friday at Immanuel Lutheran Church in Scarville. The Rev. Randy Baldwin will officiate. Visitation is from 4 to 7 p.m. today at Mittelstadt Funeral Home, 902 E. Main Street in Lake Mills, and again one hour prior to the service at the church. 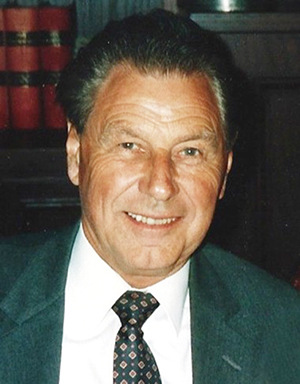 Military honors will be performed by Lake Mills Otto/Chose American Legion Post  No. 235. Burial will be at Immanuel Lutheran Cemetery in Scarville.

Rudolph, also known as “Rudy” or “Dede,” was born Jan. 6, 1924, in Scarville to his parents Miler and Myrtle. He graduated from Scarville High School in 1941 and went on to attend Waldorf College, prior to enlisting in the Army and serving in World War II in 1943.

During the war Rudolph served in Europe with the 103rd Infantry Division (Cactus Division), which fought in several battles, including the Battle of the Bulge, as part of the Rhineland Central Europe Campaign. Rudolph independently learned German and became an interpreter in the war. For his service he received the European-African-Middle Eastern Campaign Medal with two Bronze Battle Stars and the Expert Marksmanship and Combat Infantryman badges.

He married Helen Arlene Twito in fall 1948. In 1951, he began employment at Hormel Foods Corporation in Austin, where he served in several positions until his retirement in 1989 as a corporate purchasing executive. Throughout his life, Rudolph was an active member in the community. He was a scout leader, a pilot, a Mason, a Shriner, a Flying Shriner, a Y’s Men, a legion member, an Austin City Council member, the St. Olaf Church president, an Elk’s Club member and a member of Sons of Norway.

To those who knew him — and to those he just met — he radiated irrepressible wit, humor and kindness.

Rudolph is preceded in death by his parents Miler and Myrtle; and sister, LuVerna Kingland.

He is survived by his wife, Helen Arlene; daughters Deborah and Cynthia; brother and sister-in-law KarLyle and Lois Nelson; son-in-law, Ryoji Tsuruta; grandchildren Akane, Kai and Koh Tsuruta; niece, Ann Hinman, and her family; and an untold number of friends who will miss him dearly.